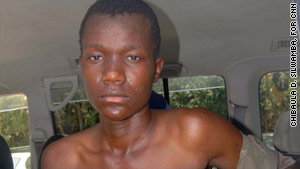 Vincent Chenjele, a victim of the shooting incident at Collum Coal Mine in Zambia on October 15.
STORY HIGHLIGHTS

(CNN) -- A Zambian judge has granted bail to two Chinese men charged with attempted murder in a mine shooting that has revived an outcry against foreign employers in the southern African nation.

Chinese managers at a mine in the southern part of the nation used shotguns to fire at a gathering of workers last month.

The miners, who were protesting poor labor conditions, were unarmed, according to Zambian government officials.

At least 11 miners were wounded.

"Where did the Chinese get the right to shoot innocent Zambians, including my son," asked Leonard Kapwizi.

Kapwizi's question reverberates with other Zambians, some of whom say foreign employers are increasingly above the law. Kapwizi's son, Vincent Chenjele, was hospitalized.

Three Chinese employees were also injured and mine equipment damaged, according to Chinese state media.

The two suspects --detained for more than two weeks -- appeared before a judge Tuesday on 13 counts of attempted murder. They were ordered to surrender their passports.

The shooting at Collum is the latest in a string of attacks between Zambian workers and Chinese managers at the coal mine.

In June, Zambian state media reported that a Chinese national "escaped lynching by an angry mob" after 22 miners were seriously injured in a gas explosion.

In late 2009, Collum mine workers "threw missiles" at Chinese managers after receiving "slave wages," according to Zambian state media.

Zambian officials have worked to quell the anti-Chinese outbursts that have followed such incidents.

"Let us be careful that we don't single out [Chinese] people," President Rupiah Banda said after the recent shootings.

"Every day people are shot by Zambians; are shot by white people; are shot by the Americans; they are shot by everybody. You know this business of Chinese! Chinese! It's like you want to create a phobia against people."

We know we can't be protected by this government because it has been heavily corrupted by the Chinese
--Michael Sata, former Zambia presidential candidate
RELATED TOPICS

Politicians find themselves locked in a delicate dance: fostering a business climate that boosts Chinese investment while ensuring their constituencies don't feel shunned.

China is Zambia's largest source of foreign investment. It has a huge influence on the nation's economy, especially in the mining industry.

In 2008, more than 55 percent of all foreign money invested in Zambia came from China, according to the Zambia Development Agency. Out of every overseas dollar that poured into Zambian mining, nearly 73 cents were from China.

Zambian government officials are quick to point out that this investment has created jobs and other benefits for locals.

The Chinese Foreign Ministry said it hopes the mining company will resolve the problem with its host country, according to Xinhua news agency.

The Chinese government has always urged its companies to comply with the laws of host countries, said Ma Zhaoxu, a spokesman for the ministry.

But some worry that China's economic influence often translates into getting preferential treatment that puts it above the law in Zambia.

In the latest case, Muchima implied that the defendants would be handled, at least in part, by the Chinese Foreign Ministry.

"There is nobody above the law. But you have got systems in place ... we have signed agreements; bilateral agreements between this government and their government. If there is an issue, it has to go through the normal ways; through the Minister of Foreign Affairs. I cannot comment on their dealings. That would be against the protocol that has been signed."

Former presidential candidate Michael Sata is a major critic of Chinese employers in the nation.

During his failed 2006 campaign, he said Zambia needed "investors, not infesters," according to local media.

In the aftermath of the Collum shooting, the Zambian Post quoted Sata as saying, "We know we can't be protected by this government because it has been heavily corrupted by the Chinese."

Padraig Carmody, a lecturer at Dublin's Trinity College, said corruption was evident while he was doing field work in Zambia last year.

"We talked to trade union officials, and what they said was that the labor inspectors, when they come and look at the labor conditions, and enforcement of the minimum wage and things like that, they tend to favor the Chinese mining houses and other investors over workers' rights."

Chinese employers in the country bypass the laws, added Jan Kees van Donge, a researcher at the University of Leiden in the Netherlands.

However, Muchima reiterated that the nation can handle affairs within its jurisdiction.