2 Americans among those kidnapped in raid on Nigerian oil rig 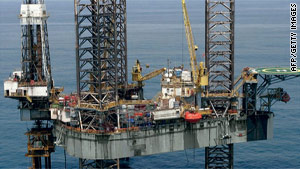 (CNN) -- At least two Americans, two Frenchmen and one Canadian were kidnapped early Monday by an armed group that raided an oil rig off the Nigerian coast.

Two crew members are in stable condition at a shore-based clinic, where they were airlifted after being wounded in the leg.

The rig off the southern coast of Nigeria at Okoro field is run by Transocean and owned by London-based Afren PLC, which detailed the hostages' nationalities and said that five were believed to have been kidnapped.

State Department spokesman P.J. Crowley put the number of hostages at seven and confirmed that two are U.S. citizens.

"We (are), of course, concerned about their safety and hope for their immediate release," he said. "We are working with Nigerian authorities ... to pursue their prompt release, and there's an investigation already under way."

Residents of Silver Creek, Mississippi, described James Robertson, one of the men kidnapped in the raid, as a "real nice guy," according to CNN affiliate WLBT.

"He's a great person, over there doing his job," said Larry Smith.

Kacey Slocum, who used to live down the road from Robertson, told WLBT that she and others were praying for their neighbor's safe return. She added that the nature of the raid made it all the more distressing.

"I never thought there would be pirates in 2010," said Slocum, whose husband also works offshore on a rig near South America.

Drilling operations in the Okoro field off Nigeria have been temporarily suspended, both companies involved said.

In a news release, Afren said a "security breach" occurred soon after its "High Island VII jackup rig" arrived but before drilling had commenced.

"The situation has not been resolved. Afren is doing everything it can to resolve the situation as quickly as possible, and it is working with relevant agencies in the Nigerian government," Afren public relations spokesman James Henderson told CNN.

"Clearly, the industry is on heightened alert," Cantwell said. "We're in wait-and-see mode."

Transocean operates six offshore rigs in Nigeria -- two deepwater rigs, two ultra-deepwater rigs and two shallow water rigs, including the one involved in the incident -- according to Cantwell.

The company has "taken additional safety precautions" on its other assets in the west African nation, he added.

There has been no immediate claim of responsibility for the attack, and Nigerian officials would not comment about the incident.

Several militant groups in the oil-rich Niger Delta have been battling the government for years over the distribution of the country's oil wealth. One of the largest such groups -- the Movement for the Emancipation of the Niger Delta -- is known for its kidnappings of oil workers.