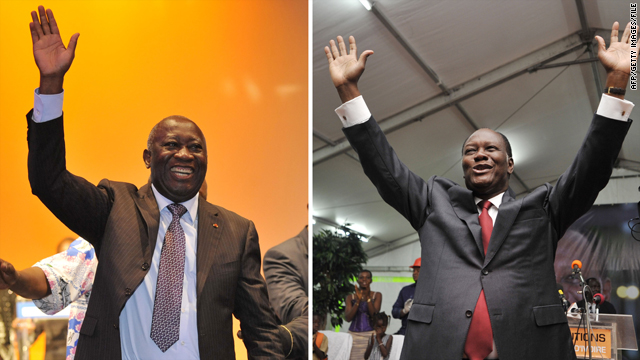 President Laurent Gbagbo announced Tuesday that his "duel" against rival former Prime Minister Alassane Ouattara will be later this month.

The announcement comes two days after the constitutional council validated the result of the election and set the runoff for November 21.

Gbagbo said he granted a request for extra time by the independent electoral commission to help prepare the second round in the best conditions.

During the first news conference -- his first since the election on October 31 -- the incumbent said he was a candidate for all and described his rival as "confined within an ethnic group."

Gbagbo got 38 percent of the vote, and Ouattara got 32 percent in the October poll.

Ivorians voted peacefully in the first round with a turnout of more than 80 percent. The United Nations and most observers have applauded the poll.

Elections had been expected since 2005, but they were postponed many times after the country plunged into instability when northern rebels took up arms earlier in the decade. Analysts hope the election will bring lasting peace.

The west African nation was once one of Africa's success stories..

The United Nations said it has bolstered its 8,650 troops already there amid reports that local rebels are threatening to disrupt the election.

U.S. President Barack Obama applauded the first round of the election after years of delay.

"The Ivorian government, the candidates, their supporters, and all political actors have an obligation to ensure that the long-delayed presidential elections are held in a peaceful and transparent manner," Obama said last month.

Ivory Coast is the world's largest cocoa-producer, according to the United Nations.