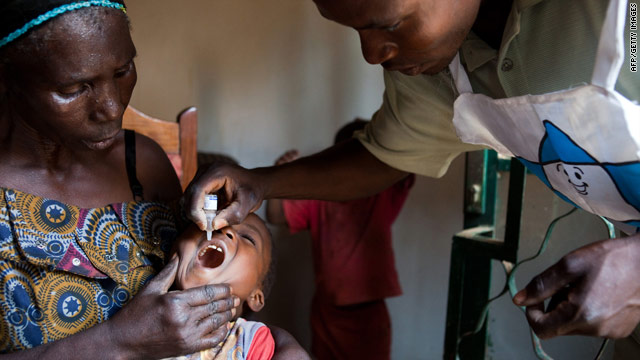 A boy gets a vaccine in Lubumbashi, Democratic Republic of Congo. Polio is highly infectious and targets the nervous system.
STORY HIGHLIGHTS
RELATED TOPICS

Since the first confirmation of polio November 4 in the Republic of Congo, at least 226 people have been diagnosed with acute flaccid paralysis -- a condition commonly associated with polio -- according to the United Nations.

Of those, 97 had died as of Tuesday -- "an unusually high mortality rate," the World Health Organization and U.N. Children's Fund said in a joint press release. At least four of the 226 total cases have already been confirmed as polio, a number that is expected to rise.

In response, the United Nations said Thursday that a polio immunization campaign targeting 3 million children and adults will start Friday in the port city of Point Noire and the Koilou region inside the Republic of Congo, 16 districts in the Democratic Republic of Congo and parts of neighboring Angola.

Most of the cases thus far have involved young adults between ages 15 and 29, the United Nations and World Health Organization noted. The immunization effort, however, will be all-inclusive.

"Every man, every woman, every child will be immunized irrespective of their past immunization status," Dr. Luis Sambo, the WHO regional director for Africa, said in a press release. "This way we can be assured that everybody is reached, including young adults, whose immunity may be low."

UNICEF said that suspicious cases began to emerge in October, with 73 cases being reported in a hospital in Pointe Noire the week of October 18 alone.

The World Health Organization said Wednesday the deaths occurred in and around that coastal city. Scientists have linked the resurgence of polio in the Republic of Congo -- which hadn't seen a case since at least 2004, according to WHO -- to a virus circulating in nearby Angola.

"The cases are continuing to rise," Sona Bari, a spokeswoman for the agency's polio eradication unit, said Wednesday.

In a statement released by UNICEF, the Republic of Congo's health minister said his nation had a "good assessment" of what called a "worrying" situation.

"Partners and resources are being mobilized to implement an appropriate response," Georges Moyen said.

Last month, a wide-scale and synchronized polio immunization drive was launched in 15 countries targeting 72 million people -- mostly infants and toddlers -- around Africa, the World Health Organization said. Some 290,000 people planned to go "door-to-door to deliver two drops of oral polio vaccine" to all children under 5 in high-risk areas.

Health officials undertook a similar effort in 2009 as well as this past spring, after polio cases were confirmed in 24 African nations. That was followed by a sharp drop in diagnoses, including a 98 percent decrease in Nigerian polio cases in 2010 compared to 2009, the World Health Organization reported.

Polio is a highly infectious disease that targets the nervous system, according the Centers for Disease Control and Prevention. Most of those afflicted show no symptoms and 4 percent to 8 percent manifest relatively minor ones. Generally, polio sufferers are permanently paralyzed in less than 1 percent of cases.