Calm returns to Guinea after days of unrest 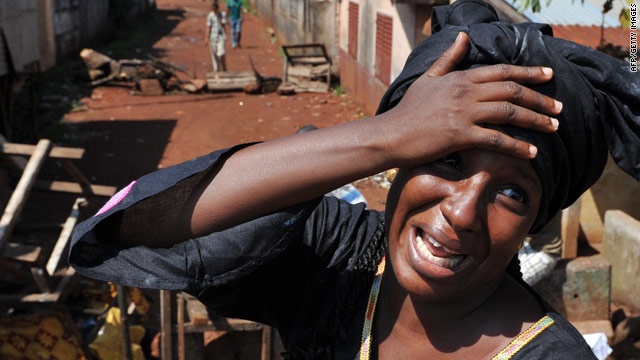 A woman cries on Thursday at the death of a relative killed in the wake of Guinean presidential elections.
STORY HIGHLIGHTS
RELATED TOPICS

Conakry, Guinea (CNN) -- After three days of violence throughout the country that killed at least nine people, injured dozens more and pushed the ruling military junta to declare a national state of emergency, calm returned to Guinea on Thursday.

The state of emergency will last until the West African country's Supreme Court finalizes results from a November 7 runoff between longtime opposition leader Alpha Conde and former prime minister Cellou Dalein Diallo that put Conde on top with 52.52 percent of the vote.

Since the provisional results were announced on Monday night, supporters of Diallo, largely from the Peul ethnic group, have clashed with Conde supporters and security forces.

Many shops in areas effected by violence reopened Thirsday, and automobile and pedestrian traffic resumed to near-normal levels.

It was a remarkable turnaround from 24 hours earlier, when military police were clashing with civilians in broad daylight throughout the capital city of Conakry.

French radio RFI reported that strife-torn cities in the northern Fouta Djallon region such as Labe, Dalaba and Pita had calmed by Thursday as well.

But residents of Conakry's impoverished suburbs of Cosa, Hamdallaye, Enco5 and Bambeto -- areas of majority Peul supporters of defeated candidate Diallo -- are wary of the near future.

Many residents reported gunfire throughout Tuesday night as roving military units continuously fired into the air.

"The daytime is calm, the violence happens at night. Last night I heard a lot of gunshots. I could not sleep, my wife and children were sleeping under the bed to avoid stray bullets," said Youssouf Bah, a Hamdallaye resident.

Last September security forces opened fire on civilians protesting military rule, killing more than 150 and injuring more than 1,000, and allegedly raping hundreds of women, according to the U.S. government and human rights groups.

Guinea, rich in minerals, is one of the poorest countries in Africa.

It has never held free and fair presidential elections until this year.