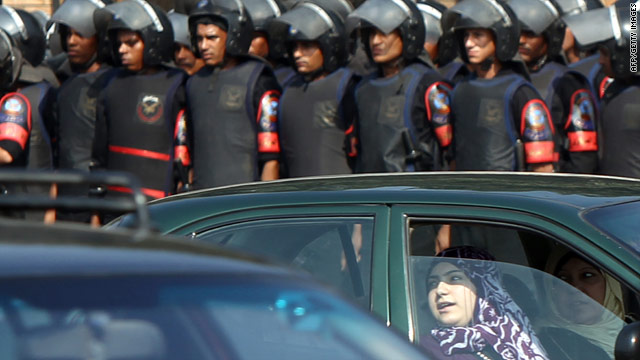 A woman drives past a row of Egyptian riot police near Cairo University campus during a protest by opposition supporters.
STORY HIGHLIGHTS

(CNN) -- A major human rights group called on Egyptian authorities Sunday to refrain from harassing candidates and their supporters after security forces reportedly arrested hundreds of activists from the biggest opposition bloc.

"Egyptians ... considered a threat to public order or security, have faced arrest, detention, criminal charges and the threat of detention without charge or trial under the emergency law," the group said in a statement released Sunday.

Senior members of the country's ruling party, the National Democratic Party, have dismissed such accusations.

The Muslim Brotherhood, which has been officially banned -- but tolerated -- since 1954, is widely seen as the main opposition to the ruling party. Its members run as independents in local elections.

While Egyptian authorities have not confirmed the total number of arrests in recent weeks, the Muslim Brotherhood claimed that security forces had arrested 1,044 of its activists as of Sunday.

The most violent clashes involving police and Muslim Brotherhood members took place on Friday at a rally in Alexandria where witnesses said police used tear gas and rubber bullets to disperse the crowd. At least 33 were injured, witnesses said.

"The Egyptian authorities must uphold the rights to freedom of expression, association and assembly and ensure that peaceful protestors are not arbitrarily arrested and detained. The rights of all candidates and campaigners should be upheld without discrimination," said Malcolm Smart, Amnesty International's director for the Middle East and North Africa.

The human rights group has also accused Egyptian authorities of restricting public access to information in the runup to the elections.

"Newspapers whose reports the authorities consider politically-sensitive have been seized or destroyed. Media sources say a dozen Egyptian satellite television channels have been suspended," the organization said in its statement.

The government said the suspensions are only related to issues with the channels' broadcast licenses and accused some religious-based programs of fueling animosity among Muslims and Christians in Egypt.

The election commission said that 76 Egyptian civil organizations will be allowed to monitor the polls, but the paperwork is not finished, official news agency MENA reported Friday.

About 800 candidates from the ruling party, 250 from the liberal al-Wafd Party and 130 from the Muslim Brotherhood are running for the parliament's 508 seats.

Smaller parties and opposition movements have declared they are boycotting the elections over transparency concerns.

Egypt has remained under a continuous state of emergency since the 1981 assassination of President Anwar Sadat.