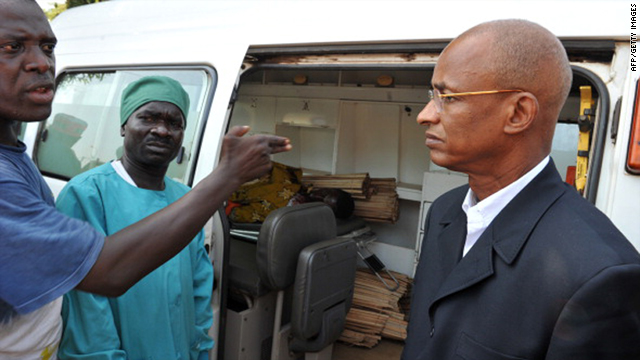 Defeated Guinean presidential candidate Cellou Dalein Diallo, right, stands on November 17, 2010 outside of a van in which lays the body of a man killed by the military in violent protests following presidential elections.
STORY HIGHLIGHTS
RELATED TOPICS

In a press conference Saturday in Conakry, European Union officials called the election credible and transparent. Still, weeks after voters went to the polls, the campaign continues to stir discord and, in some cases, violence in the west African nation.

The African nation's Supreme Court must now look at fraud allegations put forth by both Diallo and Conde, and will finalize the results by December 2. And the candidates also have voiced their disputes with authorities outside Guinea.

As of Saturday, Diallo had filed dozens of official complaints with the Supreme Court, while Conde had filed three fraud complaints.

This comes after three days of clashes between Diallo partisans and supporters of Conde and security officials in multiple cities around the country. At least nine people have died and dozens more were injured.

Diallo also plans to file a complaint with the International Criminal Court for alleged abuses in the post-election violence.

The Guinean government has declared a national state of emergency and a curfew restricting movement of people from 6 p.m. to 6 a.m., but residents of ethnic Peul neighborhoods in the Conakry suburbs of Enco5, Bambeto, Hamdallaye and Cosa said that security forces entered the homes of civilians and shot at innocent people before and after the curfew was called.

Amnesty International, the U.N. High Commission for Human Rights and the International Crisis Group have all detailed what they say are examples of arbitrary arrests, excessive force, incitement of ethnic hatred and killings by Guinean security officials.

Diallo's UFDG party (the French acronym for the Union of Democratic Forces of Guinea), has said that the government backed a bloody repression by security forces against its supporters, who are largely from the Peul ethnic group. On Saturday, Oury Bah, UFDG's vice president, told CNN that the party would make an official complaint to the International Criminal Court.

"There have been cases of [security forces] raping women, shooting at unarmed persons and inciting [ethnic] hatred," Bah told CNN on Saturday.

If necessary, "we will ask the ICC to prosecute those who put people in the streets," Dore said, referring to Diallo's supporters.

In addition to accusing Diallo of inciting violence, Dore singled out journalist Mouctar Bah (no relation to Oury Bah) of French radio RFI for calling the government repression of post-election protesters "bloody."

"What he said was a violation of the law because he cannot show a pool of blood in any Conakry neighborhood," Dore said.

Mouctar Bah told CNN that the prime minister's comments put him in a dangerous position.

"I'm scared for my personal security ... if a prime minister talks about you, attacks you on television, he is leaving you vulnerable to extremists, to police, to the army and to political officials ... I don't have any confidence in the government," Bah told CNN.

The ICC, based in The Hague, Netherlands, opened its file on Guinea after the September 28, 2009, massacre in Conakry, when security forces killed more than 150 peaceful protesters and injured more than 1,000, according to Human Rights Watch. The Guinean government said about 50 protesters died and that they were acting violently.

Fatou Bensouda, deputy prosecutor for the ICC, visited Conakry on November 19, when she released a statement saying, "The Office of the Prosecutor is keeping a close eye on the situation in Guinea and deplores that at least seven persons have been reportedly killed since the announcement of the election results."

"All reported acts of violence will be closely scrutinized by the office in order to determine whether crimes have been committed that fall under the Court's jurisdiction and should warrant an investigation."

"We have given the Supreme Court a document 50 centimeters (20 inches) wide with proof of fraud according to what the law demands. We are sure that with that, a dignified official will see that there has been fraud and the results will give El Hadj Cellou the victory," Oury Bah said.

Guinea has been ruled by a military junta, led by Gen. Sekouba Konate, since the death of longtime autocrat Lansana Conte in December 2008. The presidential election is meant to complete the transition from military to civilian rule.

Despite immense mineral wealth, Guinea is one of the poorest countries in Africa.