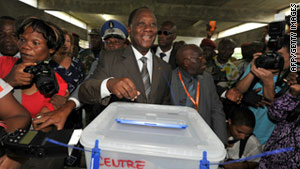 The results showed Ouattara leading Gbagbo by a margin of 60 percent to 40 percent. But the count was limited to a portion of votes cast overseas, about 15,000 of the west African nation's 5.7 million registered voters.

The figures were released as people were rushing to their houses to comply with a 7 p.m. curfew Gbagbo announced last week. Abidjan resembled a dead city, patrolled by national security forces as well as U.N. troops, while electoral commission continued its work Monday night.

Gbagbo finished ahead of Ouattara in the initial election October 31, with 38 percent of the vote compared to the challenger's 32 percent. The electoral commission has until Wednesday midnight to proclaim final results before the constitutional council validates them.

But in a press conference Monday, Gbagbo's campaign denounced a "non-transparent vote" in the country's north, which campaign spokesman Affi Nguessan said was "controlled by a rebellion still in arms and favorable to Allassane Ouattara." Nguessan said the campaign's lawyer could ask the electoral commission to the invalidate the votes in some parts of the north.

Meanwhile, Ouattara 's camp alleged that many of his supporters were intimidated and barred from voting in his opponent's stronghold.

But both candidates have vowed to accept the results of the election in front of Blaise Compaore, president of neighboring Burkina Faso and the facilitator of the country's peace process. Compaore came to Abidjan on Saturday in an effort to ease tensions before the runoff.

Sunday's vote was cast amid scattered violence in which, three people died, the United Nations said. But U.N. officials said the runoff as "globally democratic, despite violent incidents reported in the West and the North."

"We have confirmed three dead yesterday (Sunday) in the West," Young-jin Choi, chief of the U.N. Mission in Cote d'Ivoire, said in a news conference. He said the "troubles" were "rather localized."

The three Sunday deaths are in addition to three deaths that occurred on the eve of the runoff, during violent clashes between police and Ouattara supporters who were protesting Gbagbo's curfew order. The 7 p.m. to 6 a.m. curfew will be in place until Thursday morning at least.

There were more violent disturbances in this round of voting than before the first balloting, and fewer voters came to the polls this time. The electoral commission said 70 percent of voters turned out for the runoff, compared to an 84 percent turnout int he first round.

The curfew has been a contentious issue since Gbagbo announced plans to impose it during a televised debate Thursday night and signed a decree authorizing it Saturday. Ouattara said it would send the wrong signal after a mostly violence-free campaign.

Opposition leaders rejected the idea and promised not to observe the curfew.

An independent electoral commission, religious leaders, the United Nations and the European Union have urged both camps to engage in a nonviolent contest to preserve what is seen as a unique chance to get the large cocoa-producing country out of a decade of crisis and violence.

Ahead of the runoff, the U.N. Security Council authorized a temporary redeployment of troops and helicopters from its mission in neighboring Liberia in order to beef up security.

The Security Council said the situation in Ivory Coast "continues to pose a threat to international peace and security in the region."