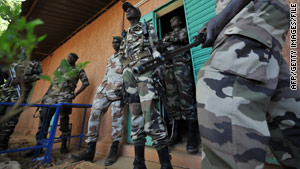 Lagos, Nigeria (CNN) -- The Nigerian military acknowledged Sunday that civilians may have been "caught in the crossfire" last week during an operation to root out criminal gangs in the country's Delta State.

The armed forces began an offensive targeting alleged militant leader John Togo on Wednesday, attacking rebel camps near the village of Ayakoromo and dislodging some militants who had sought refuge in villagers' homes.

The targeted group -- the Niger Delta Liberation Force -- has accused the military of large-scale massacre and rape in the village and surrounding areas, allegations that military spokesman Timothy Antigha called "completely false."

"It is possible a few civilians were caught in the crossfire," Antigha, a spokesman for the military's Joint Task Force, which was formed to combat rebels, said Sunday.

A local official said he saw at least 10 villagers' bodies among the casualties.

The task force released a statement Saturday saying "there is no evidence on the ground to justify any claim of genocide against the JTF."

The statement acknowledged that buildings near the targeted camps became involved in the crossfire when fleeing militants took them over and exchanged gunfire with security forces.

As many as six soldiers were killed in the operation, Antigha said, and about 100 people were displaced.

The operation has been suspended while the military assists affected residents, he said.

The oil-rich Niger Delta has been the site of frequent clashes between militant groups and the Nigerian military.

One of the most prominent rebel groups, the Movement for the Emancipation of the Niger Delta, and other militant groups say they're fighting for a fairer distribution of the region's oil wealth. Analysts say they are often paid by politicians to support their own bid for power.