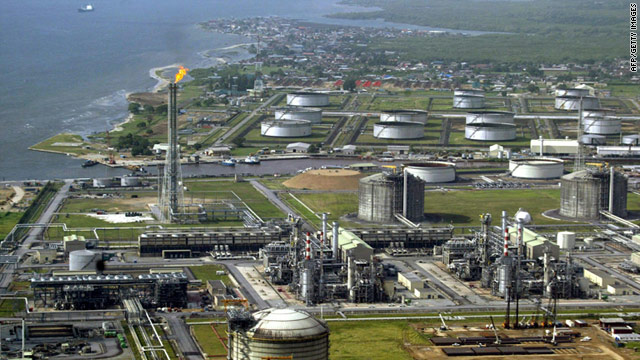 Shell Oil's oil and gas terminal on Bonny Island in southern Nigeria's Niger Delta in a file image taken on May 18, 2005.
STORY HIGHLIGHTS

Lagos, Nigeria (CNN) -- Royal Dutch Shell has people in "all the relevant ministries" in the Nigerian government and has access to "everything being done in those ministries," according to leaked diplomatic cables published by WikiLeaks and posted on the website of the British newspaper The Guardian on Thursday.

An October 2009 cable quotes Ann Pickard, then-executive vice president for Shell companies in Africa, as saying Shell had "good sources." "... She said the GON (government of Nigeria) had forgoteen that Shell had seconded people to all the relevant ministries and that Shell consequently had access to everything that was being done in those ministries."

Shell, the international oil and gas giant, said Thursday it could not comment on "the alleged contents of the cable, including the correctness or incorrectness of any statements it allegedly contains."

However, Shell spokesman David R.J. Williams said in a statement, "The Guardian's assertion that Shell has somehow infiltrated the government of Nigeria is absolutely untrue, false and misleading."

The Shell representative referenced in the cable has since left Nigeria, the company said. Shell's website shows that Pickard now is the country chair for Shell in Australia and executive vice president of Upstream Australia, "responsible for the exploration, production and gas commercialisation part of Shell's Australian business." Pickard came to Australia in March, according to the website.

The cables also say that Nigeria is considered "the most important country in Africa" because of factors including the size of its population; its oil reserves; its peace-keeping role in the Economic Community of West African States, especially Sierra Leone and Liberia; its seat on the U.N. Security Council; and the strength and size of its financial markets.

"Nigeria has enormous potential and is the seventh-largest Muslim country in the world, with an Islamic population that will eclipse Egypt by 2015," the cable says. "Having no United States presence in northern Nigeria is akin to having no presence in Egypt and is why the United States is considering opening a consulate in Kano," in the north-central part of the country.

"It is possible that Nigeria could be a future Pakistan," according to the cables. "In 25 years, there could be impoverished masses, a wealthy elite and radicalism in the North."