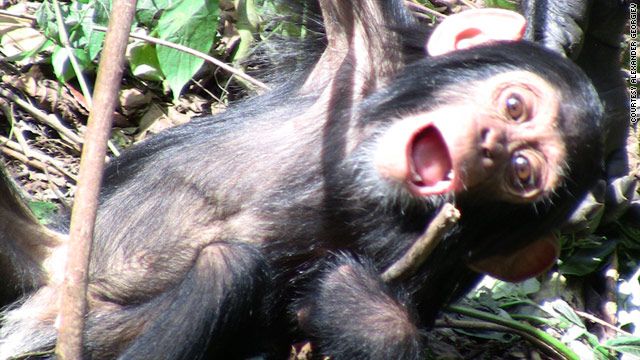 A research paper published Tuesday has found what its authors say is the first-ever evidence that young female chimpanzees in the wild "play" with sticks as if they are dolls.
STORY HIGHLIGHTS
RELATED TOPICS

(CNN) -- It's just days till Christmas, and many young girls around the world will be thrilled to find little dolls under the tree to play with.

But there's new evidence that it's not only human girls who enjoy playing with imaginary babies -- young apes may be showing the same behavior.

A research paper published Tuesday has found what its authors say is the first-ever evidence that young female chimpanzees in the wild "play" with sticks as if they are dolls.

"We find that juveniles tend to carry sticks in a manner suggestive of rudimentary doll play," they write in the current issue of Current Biology. "And, as in children and captive monkeys, this behavior is more common in females than in males."

The team of researchers watched and logged the Kanyawara group of chimpanzees in the Kibale National Park in Uganda for more than a decade.

They were surprised to see young female chimpanzees carrying around sticks, apparently mimicking the way that mothers in the group cared for their own infants.

The behavior would go on for up to hours at a time.

"The juveniles carried pieces of bark, small logs or woody vine, with their hand or mouth, underarm or, most commonly, tucked between the abdomen and thigh," they wrote. "Individuals carried sticks for periods of one minute to more than four hours during which they rested, walked, climbed, slept and fed as usual."

Co-authors Sonya Kahlenberg of Bates College and Richard Wrangham of Harvard University found that such behavior was witnessed only rarely among young male chimpanzees, pointing to the controversial idea that differences in play behavior even in other primate species may be gender-driven.

But just like human boys with "action figures," young male chimpanzees were sometimes seen playing with dolls as well.

"He was observed to bring his stick into his nest and play the 'airplane game' with it, that is, he laid on his back with his arms and legs extended upward and balanced the stick on his upturned palms and 'flew' it from side to side. This behavior is performed by mother chimpanzees with their infants and, of course, human parents do it as well. Another interesting observation is that Kakama even constructed a separate nest for his stick."

It could be some combination of nature and nurture, as monkeys and apes have been observed playing with toys and dolls in captivity before, with previous studies showing an affinity for females to take on mothering role-play.

"Sex differences in juvenile stick-carrying did not result from females observing their mothers carrying sticks, since mothers never carried sticks," the study found. "Instead, youngsters apparently learned socially from each other. Such juvenile traditions have previously been described only in humans."

So should this behavior in any way alter the way we perceive chimpanzees, and any affiliation with human behaviors?

"Regarding how this study is related to the sex difference that we see in how human children play, it has at the very least contributed to the discussion of the factors underlying these differences," Kahlenberg answered.

"Our results suggest that part of the explanation may lie in innate differences between males and females. Specifically, there may be differences in how the sexes play that shape how they interact with toys, including which types they prefer."

That finding would suggest there may be a genetic and gender-driven force behind the play.

The behavior seemed to be a practice exercise for how to care for babies, with the chimpanzees often seen taking the sticks back to their nests and playing with them in the same way mothers did with real offspring.

The authors say that the doll play may have evolved to help the animals learn how to be better mothers and caretakers.