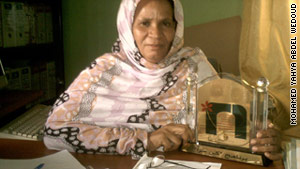 Zeinebou Mint Taleb Moussa has been fighting for women's rights in Mauritania for at least a decade.

Nouakchott, Mauritania (CNN) -- Mahjouba was raped in March on the nighttime streets of Mauritania's capital, but she will not bring charges against the man she says did it since she may be the one who ends up in prison. The 25-year-old says the legal advice she received was to not go to court, leaving her to suffer in silence.

There is no law in Mauritania that defines rape.

According to a local U.N.-funded group working with the victims, the law criminalizes the women instead of their rapists -- and society ostracizes the women.

Mahjouba, who asked not to use her real name, said: "I am sure that if I raise my voice I'm going to be criminalized by my society and I will pay the price harshly ... and as a result I may stay single for the rest of my life."

She added: "I consulted a lawyer secretly, and he advised me sincerely not to seek justice because that would throw me in jail. I know what happened to other girls who decided to go to court and face the community. Their lives were destroyed completely forever. So I already know what would happen to me if I had to follow that path.

"This Islamic republic has no place for rape victims like me."

Mauritanian laws are based on Sharia law and the penal code forbids relationships between both sexes outside marriage. That includes a consensual relationship between a boyfriend and girlfriend but can also criminalize a woman who is forced to have sex.

Sidi Athman Ould Sidi Salem, a law specialist and legal adviser to the government, said: "If raped women don't bring strong evidence, which is not easy, they would be accused of Zina -- an Arabic word meaning sex out of marriage -- and end up in jail. It's because the victims of rape are always accused of a Zina which make a lot of problems."

Sidi Athman added: "The rape issue has been one of the many taboos that haven't been investigated (by the government)."

UNFPA, which promotes health and equality issues, is working with local groups and the government to define rape in law and protect its victims.

Thierno Coulibaly, UNFPA assistant representative in Mauritania for its reproductive health program and population and development program, said he was not aware of any rape victim in the capital currently in jail but could not comment on what was happening outside the capital.

Even with legal protection, women victims of rape still face a social stigma that is hard to overcome. He said: "Women are still afraid to complain if they are victims of rape because there is an attitude from the society."

Coulibaly added: "There is no law to define rape but there will be one. And work is being done with police officers and judges ... to let them understand the problem is not the woman, but the perpetrator of the rape."

The U.N.-funded Mauritanian Association for Maternal and Child Health (known by its French acronym AMSME) is at the forefront of trying to change both the law and society.

When a woman reports a rape, police contact AMSME and the woman is taken to the El Wafa center.

Zeinebou Mint Taleb Moussa, a former midwife and president of the organization, set up the El Wafa center in 2001 to provide help for rape victims.

Mint Taleb Moussa said: "There is no mention of the words 'rape,' or 'sexual violence' in the Mauritanian laws which left a growing number of women as victims ... All the words that are related to sex are extremely taboo and can never be mentioned publicly."

Mint Taleb Moussa said there were 308 rape cases registered by her organization in 2008 and 205 in 2009, but she noted that "what has been reported is only the tip of the iceberg."

She said they mainly deal with cases in the capital, Nouakchott, but there remain many unreported rapes in the city and the country.

She said rape victims bring shame to their families and the woman's reputation, and few women have the courage to report the crime and be registered.

Mint Taleb Moussa added: "We focus basically on the capital Nouakchott, but we think of covering the interior regions as well."

Mint Taleb Moussa has tried in vain for a decade to get her message into the national media to assist rape victims.

"I requested having a program in the state mass media -- radio and TV -- but my request was turned down. Recently, the national TV hosted me for the first time on a program, but it was censored without giving any justification ... It's a big problem here to defend rape victims," she said.

AMSME is also working with government and religious leaders in a bid to get a new rape law.

Sidi Ould Beyade, spokesman for the Ministry of Welfare, Children and Family, said the ministry has begun work on the issue to help end the ordeal of rape victims.

"For the first time, the ministry is now in touch with NGO activists, lawyers and opinion makers with the purpose of studying the situation, first, and then trying to act."