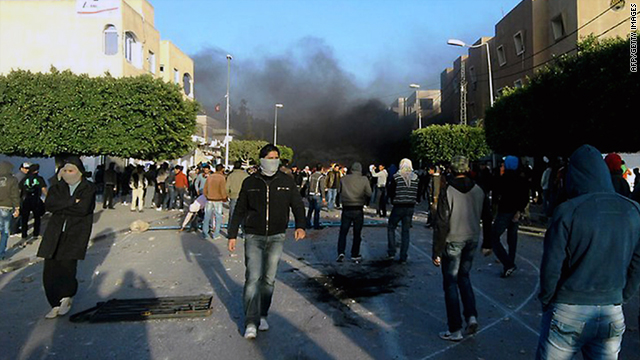 The incident between Tunisian national guard members and protesters occurred in the city of Menzel Bouzaiene, a part of the southern Tunisian province of Sidi Bouzid that has been a hotbed for social unrest.

Demonstrations by people urging the government to improve social services gained intensity last week, after a man who committed suicide reportedly had cited bad living conditions and unemployment as his reasons. Tunisia's government has called the protesters violent troublemakers.

An interior ministry official, cited by the TAP news agency, said that protesters on Friday set ablaze a railway engine and three national guard vehicles before erecting barricades in some streets.

They then torched and tried to break into a national guard building while throwing Molotov cocktails at police, according to the report.

Following last weekend's riots, government leaders in Tunis announced this week their intentions to use $5 million to establish 306 projects at which citizens with college diplomas could work. But further details weren't divulged, including when and where the program might be implemented.

Tunisia has been ruled for 23 years by President Zine el Abidine Ben Ali, an ally of Western powers and a target of activist and human rights groups that claim he runs a police state that has infringed on citizens' rights.