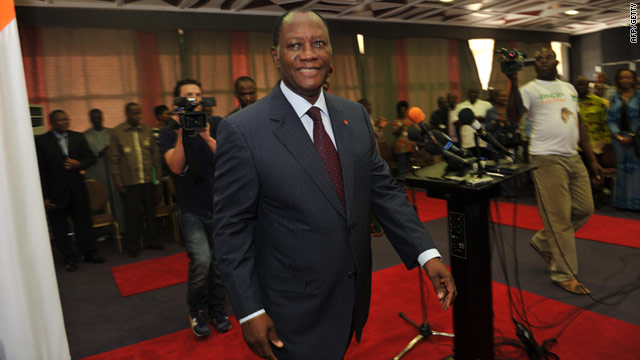 Alassane Ouattara, the man widely recognized as the legitimate leader of Ivory Coast, has called for a general strike.
STORY HIGHLIGHTS

"The call for the strike was not followed," the assistant press officer for the LIberian Embassy in Washington, Cinthia Guibi, told CNN. "People went to work; it was just normal."

A reporter in this port city said businesses appeared open as usual, despite Alassane Ouattara's call over the weekend for the strike to force incumbent Laurent Gbagbo from power after his apparent loss in the November 28 presidential runoff.

The Ivory Coast's Independent Electoral Commission has named Ouattara, an opposition leader, as the winner. But its Constitutional Council invalidated those results and declared that incumbent Gbagbo won.

Ouattara's demand came amid mounting international pressure on Gbagbo to step down.

In Paris, French Foreign Ministry spokesman Bernard Valero told reporters Monday that the ministry had received an official request from Ouattara's backers to put his ambassador into place, and was reviewing the person's credentials.

The Ivory Coast has been paralyzed by the political stalemate, and scores of people have died in related violence. International powers, including the United States, the United Nations and the African Union, have recognized Ouattara as the winner and urged Gbagbo to cede power.

About 14,000 Ivory Coast residents escaping the instability and violence have fled to eastern Liberia, according to the U.N. refugee agency.

A few deaths have been reported among the refugees, including a child who drowned during the crossing of the Cestos River into Butuo, Liberia. Observers saw malnourished children and people with malaria, respiratory infections and diarrhea.

Sixty-two percent of the refugees are children and 55 percent are female, Liberia's representative to the U.N. High Commissioner for Refugees, Ibrahima Coly, told CNN on Monday.

"So far, the Liberian population has welcomed these people in a very warm way and they are sharing whatever they have," he said from Monrovia.

In general, the refugees are "physically OK," he said. "We have come across a few people who have their feet swollen because they have been walking for more than two or three days before reaching the border. We have seen also some kids who look a bit tired or malnourished, but these are really a limited number so far."

Last Friday, the 15-member Economic Community of West African States said it would not hesitate to use "legitimate force" if necessary to defuse the crisis.

The African Union has suspended Ivory Coast from the organization "until such a time the democratically elected president effectively assumes state power." The World Bank has halted lending and disbursing funds to Ivory Coast and has closed its office in the country.

Kyung-wha Kang, the U.N. deputy high commissioner for human rights, has said that between December 16 and December 21, human rights officers had "substantiated allegations of 173 killings, 90 instances of torture and ill treatment, 471 arrests and detentions and 24 cases of enforced or involuntary disappearances."

She added that the actual numbers may be higher since restrictions on movement by U.N. personnel have made it "impossible to investigate all the allegations of serious human rights violations, including reports of mass graves."

While acknowledging "the situation is very, very difficult to live" in, Charles Ble Goude -- the nation's youth minister under Gbagbo -- disputed the U.N. report's findings. He said Gbagbo supporters were not to blame for the violence. Instead, he accused Ouattara's supporters of using weapons at what had been billed as peaceful rallies to attack soldiers.