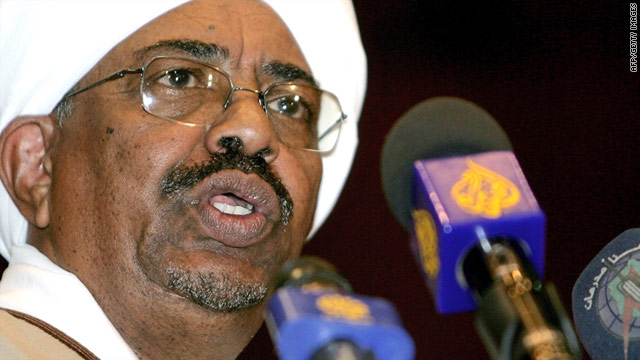 Sudan's president Omar al-Bashir, has theatened to pull out of peace talks with rebel groups concerning the region of Darfur.
STORY HIGHLIGHTS

Khartoum, Sudan (CNN) -- Sudan threatened to withdraw from peace talks with rebels in the western Darfur region unless an agreement was struck by Thursday.

"If we reach an agreement tomorrow then God be praised but if we don't then we will withdraw our negotiating team," President Omar al-Bashir said at a rally Wednesday in Nyala, the capital of South Darfur state.

Al-Bashir, who is wanted by the International Criminal Court for war crimes in the western Darfur region, said he would not deal with rebels bearing arms after the talks ended in Doha, Qatar.

"These (rebel) movements are enjoying the negotiation process and their residency in foreign hotels while the people of Darfur are suffering the flames of war," al-Bashir said. "We will not negotiate with anyone who carries a gun and claims to lead an armed group that represents the will of the people."

We will not negotiate with anyone who carries a gun and claims to lead an armed group that represents the will of the people.
--Sudanese President Omar al-Bashir.
RELATED TOPICS

The anti-government Justice and Equality Movement called al-Bashir's statement a declaration of war.

"What the president said yesterday has blocked the way ahead on the road to a political solution," said a statement from Ahmed Hussein Adam, a spokesman for the group. "It is a declaration of war and a limiting of any future chance for peace."

Fighting erupted in 2003 between rebel groups and al-Bashir's Arab-dominated government in Khartoum. More than 300,000 people have been killed in this desolate region, where hopes for peace have gone up and down over the last few months.

Negotiators had previously set a December 31 deadline for agreement in the peace talks, which have so far not made much progress.

The deadline was ahead of a key referendum on independence for Southern Sudan that begins January 9. North and South, dominated by non-Arab Christians and animists, have fought one of Africa's longest-running civil wars.

The Darfur conflict is separate from the North-South divide, but independence for the South could help embolden rebels in Darfur.