Ouattara gives Gbagbo a deadline to step down in Ivory Coast 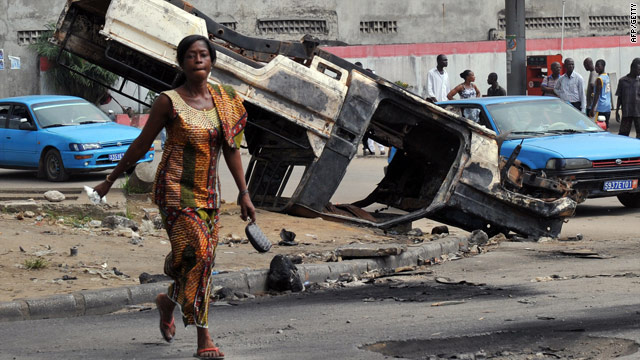 Abidjan, Ivory Coast (CNN) -- A three-man West African delegation won't return to Ivory Coast until Monday, when it will ask self-declared President Laurent Gbagbo to relinquish his post or face a military ouster, a representative of the group said Friday.

But Gbagbo remained defiant in his claim that he won a November 28 election fairly -- a claim disputed by challenger Alassane Ouattara and a growing international bloc that has recognized him as the winner of the presidential runoff election.

Ouattara and Gbagbo, the incumbent, set dueling deadlines for the other to stand down, but neither show any signs of doing so.

Charles Ble Goude, a minister in Gbagbo's cabinet, ordered Ouattara out of Abidjan by Saturday.

"If you (Ouattara) don't do it by the first of January, when that day passes, I can no longer be responsible for the security of the people at the Golf Hotel," said Charles Ble Goude, a minister in Gbagbo's cabinet, whipping supporters into a frenzy at a rally Wednesday.

The Golf Hotel is where Ouattara has been holed up since the election.

"I ask the people of Ivory Coast to be ready with their bare hands to remove Ouattara!" Ble Goude said.

A spokesman for Ouattara said that Ouattara told African leaders at a meeting earlier this week that he was willing to offer Gbagbo amnesty in return for ceding power, setting a midnight Friday deadline.

The three-man delegation, however, is not set to travel back to Abidjan until Monday, when it will again ask Gbagbo to step down, Nigerian defense spokesman Col. Yerima Mohammed said Friday.

Achi said the ECOWAS leaders asked Ouattara to spell out the conditions under which he would be willing to see Gbagbo leave quickly and peacefully.

"He offered to give Gbagbo amnesty and other conditions related to a former head-of-state status but he said that these offers will be only available if former President Gbagbo is ready to recognize that he has lost elections," Achi said.

Ouattara, said Achi, "still wants the crisis to be over as quickly as possible" and hopes it will not extend beyond Monday.

If the ECOWAS appeal to Gbabgo fails again, the regional bloc's defense committee will meet in Mali January 17-18 to finalize a military option and then report back to the heads of state, Mohammed said.

Military force is a last resort, Mohammed said, adding that it's hoped Gbagbo will step down peacefully.

The crisis began when the independent Electoral Commission declared Ouattara the winner of the runoff, followed by the West African nation's Constitutional Council's declaration that Gbagbo was the winner.

Meanwhile, in an interview with EuroNews, Gbagbo called for Ouattara to support a recount of the runoff vote and declared there was no reason for him to step aside.

"It must be understood that (the Electoral Commission's declaration) was an illegitimate result which was prematurely declared by a body that had no right to do so," he said. "It's on this point that the west is digging its heels in. After the vote, the Constitutional Council meets and gives the result. It declares who is the elected president, and that was me. It's not open to debate."

Earlier this week, an ECOWAS delegation consisting of Presidents Yayi Boni of Benin, Ernest Bai Koroma of Sierra Leone and Pedro Pires of Cape Verde met with Gbagbo in Abidjan. But their pleas for him to leave office were in vain.

The U.N. High Commissioner for Human Rights, Navi Pillay, sent individual letters to "a group of leaders in key authority positions" to remind them "in the strongest terms" that they will be held "personally accountable for human rights violations."

"The international criminal justice system that has developed over the past 15 or so years has given us a tool of accountability we did not have before," Pillay said. "No longer can heads of state, and other actors, be sure that they can commit atrocious violations and get away with it."

The letter was sent to Gbagbo and the commanders of the Ivorian Republican Guard, the marines and security forces.

"We have received reports of at least two mass graves; however, U.N. human rights teams have been denied access to the scenes of these atrocities in order to investigate them," Pillay said. "Denying access to alleged mass grave sites and places where the victims' mortal remains are allegedly deposited constitutes a clear violation of international human rights and humanitarian law."

The U.N. refugee agency said Friday that more than 18,000 refugees have fled the country for neighboring Liberia.

In London, British officials informed Philippe D Djangone-Bi, the man sent by Gbagbo as his ambassador to Britain, that he is no longer recognized in the position as of Friday.

"We will be moving to recognize the appointee of President Alassane Ouattara in the usual manner," the office said in a statement.

Earlier this month, representatives of European Union countries agreed to only accept ambassadors appointed by Ouattara. France is reviewing the credentials of the Ouattara appointee, and Belgium has said it would accept the new president's ambassador.

France has renewed its call for citizens -- especially those with children -- to leave Ivory Coast as soon as possible, the French Foreign Ministry said Friday. France last week warned of dangers in the West African nation.

"Although foreigners have not so far been directly threatened, the French authorities renew their advisory to defer plans for trips to Ivory Coast, and to all the French who can ... to temporarily leave Ivory Coast until the situation normalizes," the foreign ministry said in a statement Friday.

The United States and United Kingdom also have warned their citizens of possible violence.

The U.S. State Department has ordered non-emergency personnel and family members to leave Ivory Coast. It also warned U.S. citizens against traveling there.

The UK Foreign Office also had advised British citizens to avoid travel to Ivory Coast and, for those already there, to leave the country unless they "have a pressing reason to remain."