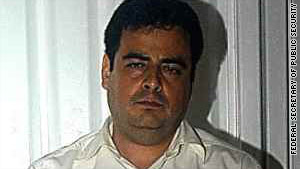 (CNN) -- The head of the Beltran Leyva drug cartel has been captured, Mexican federal police announced.

Carlos Beltran Leyva, 40, was arrested Wednesday in the northwest city of Culiacan after showing a fake driver's license with the alias "Carlos Gamez," which authorities knew to look for, police said Saturday in a statement. He later admitted to his identity.

It came just two weeks after the drug boss' brother, Arturo Beltran Leyva -- known as "El Barbas" or "The Bearded One" -- was killed in a shootout in Cuernavaca, outside Mexico City.