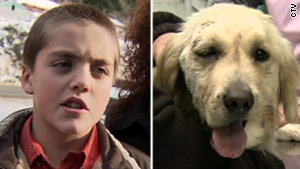 (CNN) -- One lucky boy in Canada can say without a doubt that he has his own personal guardian angel -- not of the spiritual kind, but of the furry.

On Saturday an 18-month old golden retriever saved her owner from being attacked by a cougar while in the backyard of their home in Boston Bar, British Columbia, about 130 miles north of Vancouver.

The dog -- named Angel -- leaped into action and threw herself between her owner, 11-year-old Austin Forman, and the cougar that was charging at him.

Sherri Forman, Austin's mother, said her son was outside with Angel around 5:30 p.m. gathering firewood from their backyard. She explained that Angel normally runs around and plays when she is outside, but on this afternoon she was behaving differently.

"He had come in at one point to tell me how cute Angel was being because she was sticking pretty close to him in the yard, which was unusual for her," Forman told CNN.

In hindsight she realizes that Angel was protecting her son from an unseen danger.

When the cougar charged, Angel ran to protect the boy.

"She intercepted the cougar," Forman said. "Austin came into the house very upset, and I had to get him to calm down so I could understand what he was saying. Finally he said 'there's a cougar eating Angel.'"

Angel and the cougar fought under the family's deck, while Austin's mother called 911 for help. A constable was in the area and able to make it to their home and kill the cougar quickly.

Forman said when her nephew pulled the cougar's body off Angel, who at first appeared fatally injured, the dog sucked in a "big breath of air and then got up." Ever the protector, Angel "walked to Austin, sniffed him to make sure he was alright, then sat down." Despite receiving a few deep bites and scratches Angel's prognosis is good.

"She had some pretty nasty injuries across the front of her head and neck" said veterinarian Jack Anvik who is treating Angel at the Sardis Animal Hospital. "If there had been enough time for the two of them together the cougar would have probably killed the dog," he told CNN.

According to his mother, Austin is so thankful for Angel's bravery that he "went to town with his grandpa and bought a huge steak for her."

"I feel very good now that we know she's alive and the fact that she saved me and survived is amazing," Austin told CNN.

And Angel appears to be in good spirits while she recovers at the Animal Hospital.