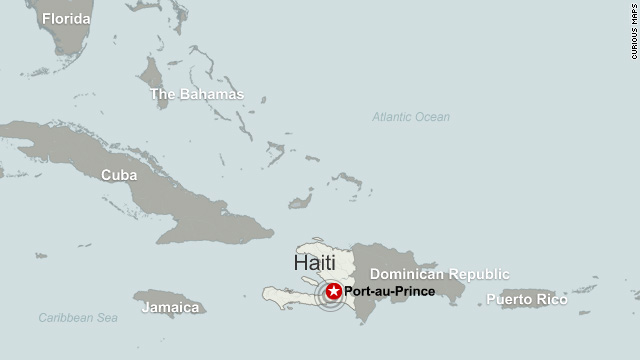 (CNN) -- A major earthquake struck southern Haiti on Tuesday, inflicting a catastrophe on the impoverished Caribbean nation. Here are some facts about Haiti:

• The country of Haiti makes up the western one-third of the island of Hispaniola in the Caribbean. Hispanola is between Cuba and Puerto Rico, and the eastern two-thirds of the island is the Dominican Republic.

• The capital of Haiti is Port-au-Prince.

• Haiti is one of poorest countries in the Western Hemisphere. Eighty percent of residents live in poverty, according to the CIA World Factbook.

• Haiti is one of the most densely populated and least developed countries in the Western Hemisphere.

About Haiti (from the CIA World Factbook)

Complete coverage of the earthquake

• 1697 -- The Spanish recognizes the French's control of the western third of the island; they name it St.-Domingue.

• January 1, 1804 -- Haiti gains independence from France; Haiti is the second oldest independent nation in the Western Hemisphere after the U.S.

• 1949 -- Army officers take control of the government again after rioting breaks out.

• 1956 -- Magloire resigns after rioting breaks out; the army takes control of the government again.

• 1964 -- Duvalier declares himself president for life and rules as a dictator.

• 1971 -- The Haitian Constitution is amended to allow the president to choose his successor; Duvalier chooses his son, Jean-Claude, then 19.

• 1986 -- Jean-Claude Duvalier flees the country after a revolt; Lt. Gen. Henri Namphy runs the country and tries to get rid of the Tontons Macoutes but fails.

• March 1987 -- A new constitution that calls for presidential and national assembly elections by the people is adopted.

• November 29, 1987 -- Elections are canceled after terrorist attacks on polling places.

• January 1988 -- During the rescheduled vote, the people elect a civilian president and a parliament.

• June 1988 -- Namphy overthrows the new government and declares himself president of the military government.

• September 1991 -- Aristide flees the country after being ousted in a military coup; the Organization of American States and United Nations lead trade boycotts to try to force Aristide's return to power; many Haitians try to flee to the U.S. but are forced back to Haiti; later the refugees are sent to Guantanamo Bay, Cuba

• September 17, 1994 -- President Clinton sends a delegation to Haiti in hopes of avoiding a military conflict. Former President Carter, Colin L. Powell and Sen. Sam Nunn are among the delegation. The peace deal does prevent an outbreak of fighting.

• November 2000 -- Aristide is elected president again; most other parties boycott the elections, claiming they are fraudulent.

• January 2004 -- The terms of most members of Haiti's parliament end, and no new legislative elections are held.

• February 2004 -- Rebels and political opposition leaders are opposed to Aristide's leadership and methods and want him to be removed from power. Aristide says he will remain in office until the last day of his term, February 7, 2006.

• February 10, 2004 -- The death toll from the uprising rises to 42. The looting and violence creates a severe humanitarian crisis.

• February 17, 2004 -- The death toll from the uprising hits 50. The rebels control most of the country north of Port-au-Prince.

• February 21, 2004 -- An international assessment team with officials from the United States, France, Canada, the Caribbean Community and OAS arrive in Haiti to present Aristide with a peace plan. He accepts the terms of the plan, which include the appointment of a new prime minister, the establishment of a bipartisan Cabinet, the holding of new elections to be overseen by international observers and the disarmament of militias, stationed in much of the north. The opposition leaders say they reject any plan that does not include the immediate resignation of Aristide.

• February 25, 2004 -- President George W. Bush says the Coast Guard will turn back any Haitians attempting to enter the U.S. and urges the United Nations to compile an international security presence there.

• March 2004 -- American and French troops deploy as part of a multinational peacekeeping force.

• March 2, 2004 -- Haitian rebel leader Guy Philippe declares himself the country's new police chief and calls for the re-establishment of Haiti's army, which Aristide disbanded in 1991. The U.S. does not recognize Philippe as the head of the Haitian police.

• April 2004 -- The U.N. secretary-general recommends the creation of a multidimensional stabilization operation to assist with the situation in Haiti. The operation is called the United Nations Stabilization Mission in Haiti.

• June 2004 -- A U.S.-led multinational force turns over authority in Port-au-Prince to U.N. peacekeepers.

• February 7, 2006 - After election scheduling delays and allegations of election fraud, Preval is elected president of Haiti.

• February 2007 -- Preval has the force of 8,000 U.N. peacekeepers in Haiti begin an offensive against street gangs in Port-au-Prince.

• July 2009 -- Dozens go missing, and at least 15 are killed after a boat carrying more than 200 capsizes near the Turks and Caicos Islands.

• January 13, 2010 -- The Red Cross estimates that the quake will affect at least 3 million Haitians.

• A president serves as Haiti's head of state.

• The people elect the president to a five-year term.

• The president appoints a prime minister to serve as head of the government.

• A parliament called the National Assembly makes the country's laws.

• The upper house, called the Senate, has 27 members, elected by the people to six-year terms.

• The lower house, called the Chamber of Deputies, has 83 members, elected to four-year terms.

• Haiti is a country in the West Indies.

• Most of Haiti is mountainous, and the country's name comes from an Indian word that means high ground.