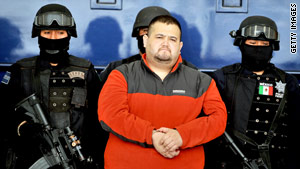 The capture of the high-level drug trafficker comes on the heels of successful military operations against another cartel last month.

Mexican federal police, assisted by the U.S. Drug Enforcement Administration, made the arrest in the city of La Paz, Mexico, the capital of the state of Baja California Sur, DEA spokesman Michael Sanders said.

Garcia Simental was a top lieutenant of the Tijuana cartel until he defected to the rival Sinaloa cartel after a power struggle.

"He is one the most notorious drug lords and was on a list of the Top 24 drug traffickers in all of Mexico" said another DEA official, who asked not to be identified because officials were still gathering preliminary information.

Authorities presented Garcia Simental, together with another man captured in the raid, Diego Raymundo Gutierrez Gomez, to the media in Mexico City on Tuesday.

Garcia Simental is accused of more than 300 murders, most of them since he split from the Tijuana-based Arellano-Felix organization in April 2008, Federal Police Section Chief Ramon Eduardo Pequeno said.

Once he split from the Arellano-Felix cartel, Garcia Simental continued to operate a drug trafficking organization in Tijuana with the help of rival cartels.

The Sinaloa cartel and the Michoacan, Mexico-based La Familia cartel supplied Garcia Simental's group with drugs, which he would smuggle into the United States, Pequeno said.

This splintering of the Tijuana cartel was a cause of much of the violence seen in the border city since 2008, he said.

Tuesday's arrest was the result of more than five months of intelligence operations, Pequeno said.

There was a reward of up to 30 million pesos (U.S. $2.4 million) for Garcia Simental's capture.