A final goodbye before 'everything fell' 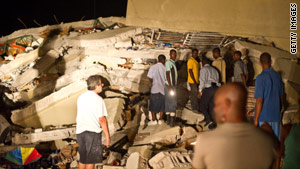 A devastating earthquake leaves much of Haiti's capital in ruins. People search for survivors at a supermarket Tuesday.
STORY HIGHLIGHTS

Watch live reports from Port-au-Prince, Haiti. Anderson Cooper is on scene for firsthand accounts of the horror and devastation from the earthquake.

(CNN) -- On Friday Martin Poitevien said goodbye to her parents at Miami International Airport before they flew home to Port-au-Prince, Haiti.

"My mom is a worrier so I just told her, 'Stop with your worry. Go home and enjoy your life with Dad. Go home and have the happiness and peace you've earned and deserve.' I will remember this always because she didn't say anything. She just smiled," Poitevien said in a phone interview Wednesday.

Four days after the visit, a few hours after a 7.0-magnitude earthquake struck the Haitian capital, Poitevien's brother called to say he had gone to their parents' house to make sure they were all right. He saw his father's feet poking up from the rubble. Seventy-five-year-old Fede Poitevien died in his living room. By Wednesday, Innocent Poitevien's body also was found, her daughter said.

The couple had spent their lives in one of the Haiti's most depressed districts, Carrefour. In a nation considered the Western Hemisphere's poorest, the Poiteviens worked tirelessly to maintain the family pharmacy, putting every cent toward their children's educations. See CNN's complete coverage of the quake

Video: 'The world's coming to an end'

Video: Reports filter in from Haiti

Video: People were 'crying for help'

Martin Poitevien is a clinical cancer researcher in Miramar, Florida. She left Haiti in 1986, shortly after her husband was murdered, she said.

She first moved to Canada and then to South Florida with her young daughters.

"The girls really adored their grandparents. My father acted like my daughters' father in many ways," she said. "My parents were strong people, but I must be the strong one now. I am expected to be that way. I have not told my daughters yet. I am not sure how to tell them."

Over the past few weeks, the grandparents doted on the girls, taking them for long walks in their suburban neighborhood and speaking Creole with them.

At Notre Dame d'Haiti Catholic Church in Miami's vibrant Little Haiti neighborhood, the Rev. Reginald Jean-Mary recalled spending time with Fede Poitevien. "He was chatting and telling me how happy it made him to be at the Mass and how inspired he felt. We were telling him how good he looked for his age," Jean-Mary said.

The church will host a prayer service at 7:30 p.m. ET Wednesday and is meeting in the afternoon to discuss how best to send supplies and financial assistance to Haiti.

The pastor also is working on what he'll tell his congregation -- many of whom lost relatives and friends in the quake.

"You aren't going to tell people, 'Well, that's the way things are,' " he said. "You just have to listen to them and be there for them and also reassure them that the light won't turn off on Haiti. In darkness, there is a pinpoint of light. No matter what the rest of the world may think of Haiti, how it's a country that can feel forgotten, we are not a doomed people."