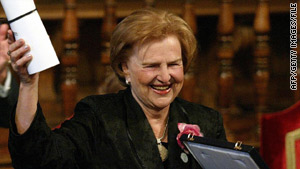 (CNN) -- Zilda Arns Neumann, a Brazilian doctor and care worker dedicated to helping the people of Haiti, was among those who died in Tuesday's devastating earthquake. She was 75.

Brazilians were shocked at the loss of Arns, who founded a well-known charity in Haiti called Children's Pastoral. It specialized in providing education and aid to children, pregnant women, and families.

The Nobel Peace Prize nominee was back in the country attending a religion conference and teaching classes to motivate leaders and volunteers of her organization, according to a statement on the Children's Pastoral Web site.

For her work in Haiti, Arns earned comparisons to India's Mother Teresa, according to local media.

Her nephew, Brazilian Sen. Flavio Arns, told the state-run Agencia Brasil news agency that her death came after she finished a speech at a church. As people were leaving, she stayed behind to speak with the pastor and was inside when the structure collapsed, he said.

"The Arns family hopes that this awakening of international solidarity will continue beyond the tragedy imposed by nature, always in defense of full dignity to people," Flavio Arns said.

Brazilian President Luiz Inacio Lula da Silva is among dignitaries who will attend Arns' wake Friday in Brazil, according to the Children's Pastoral Web site.

As of Thursday afternoon, Brazilian authorities had confirmed 15 Brazilians killed in the quake.