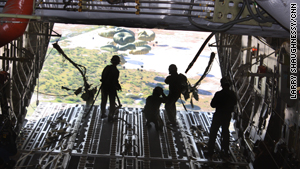 ONBOARD AN AIR FORCE C-17 OVER HAITI (CNN) -- Bypassing the gridlock of Haiti's main airport and congestion of roadways in the earthquake-ravaged country, the U.S. military delivered badly needed food and water on Monday by parachute.

A C-17 cargo plane left Pope Air Force Base in North Carolina shortly after noon, and three hours later dropped 40 pallets -- or "bundles" as the Air Force refers to them as -- holding bottled water and Meals, Ready-to-Eat, or MREs, on a field just north of the Port-au-Prince airport in Haiti.

It was the first airdrop of humanitarian supplies by the U.S. military into Haiti since the deadly earthquake there nearly a week ago.

"There are so many relief agencies funneling through the airport that it has kind of created a bottleneck," U.S. Air Force Lt. Col. Leon Strickland told CNN en route to the drop point. "We're going to put things directly out of the air onto the ground and open up another distribution point north of the [Port-au-Prince] airfield."

The mission came just three days after Defense Secretary Robert Gates told reporters at the Pentagon that he thought such airdrops would pose serious problems, especially with crowd control.

Gallery: Frantic rescues in a race against time
RELATED TOPICS

"It seems to me that, without having any structure on the ground in terms of distribution, that an airdrop is simply going to lead to riots as people try and go after that stuff. So without any structure for distribution or to provide security when things become available, then it seems to me that's a formula for contributing to chaos rather than -- rather than preventing it," Gates said.

Strickland, commander of the airdrop mission, said safety of the Haitians was still a consideration, but the military had taken steps to insure control over the distribution.

iReport: People continue looking for loved ones in Haiti

"We are obviously concerned about the welfare of the people on the ground," he said, adding, "I'm confident that our members on the ground have created a secure environment for us to conduct airdrop operations."

This first flight carried a total of 9,600 bottles of water and 42,000 MRE packets. One MRE is usually considered one meal for a U.S. soldier in combat, but there is enough food in an MRE packet to make a small meal for two people.

Most of the food in an MRE can be eaten straight from the plastic vacuum-packed pouch. But if water is added to a chemical heater, a hot meal results.

Each pallet was rigged with a large parachute as well as special corrugated cardboard padding that would minimize damage to the water and food when the load hit the ground.

One of the supervisors on the rigging crew at the Army's Fort Bragg, which is adjacent to Pope Air Force Base, said they wanted to make sure as much of the aid, especially the water, survived the airdrop, but they predicted as many as 1-in-10 of the bottles would break on impact. The MREs are much less susceptible to damage during airdrops.

Get latest developments on situation in Haiti

As the C-17 approached Haiti, the pilot dropped to 600 feet above the ground and opened the huge rear ramp. When a computer in the cockpit calculated that the plane was over the drop zone, a signal was given, the pilot pitched the plane upward and the huge straps and gate that held the cargo in place were released. Within seconds, gravity pulled all 40 pallets out of the plane and the parachutes automatically deployed.

In less than a minute the food and water was on the ground, ready to be unpacked and distributed.

Maj. Jeff "Ratdog" Daniels, the pilot of the C-17, said the U.S. military teams waiting for the airdrop on the ground reported all 40 parachutes opened properly and all the bundles landed on target in the planned drop zone.

While this airdrop is a first for the military effort in Haiti, the Air Force is well-practiced in this type of mission. Almost daily, Air Force cargo planes drop food and water into remote areas of Afghanistan for U.S. troops fighting there.

Several of the young military personnel CNN spoke to were pleased to be taking part this part of the huge humanitarian mission.

Even though she joined the military while the United States was embroiled in two wars, Pvt. Caitlyn Lopez of the 18th Airborne Corps said "this is what I joined the Army for." She was among dozens of soldiers at Fort Bragg who hand-packed and rigged the bundles of humanitarian aid that were dropped Monday.

The military planned to use Monday's flight as a test to see if airdrops would be a practical and effective way to continue to deliver aid. The decision on whether to do more airdrops not immediately made, but just after returning to Pope AFB, Strickland said of the mission, "It was a success."