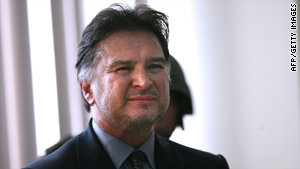 Alfonso Portillo promised to clean up corruption, but his government faced the same accusations as predecessors.
STORY HIGHLIGHTS
RELATED TOPICS

(CNN) -- Guatemalan authorities Sunday were searching for former President Alfonso Portillo, who is wanted for extradition to the United States on money-laundering charges, a spokesman for the International Commission against Impunity in Guatemala (CICIG) told CNN en Español.

As of Sunday evening, Portillo, who was president of Guatemala from 2000 to 2004, had not been located despite search warrants carried out in at least four different locations, officials said.

The search began after a Guatemalan court approved a U.S. request that Portillo be extradited to face charges in the United States, CICIG said.

Portillo is accused of funneling money into European and Caribbean accounts via banks in the United States.

Portillo came into power promising to clean up corruption, but found his own government mired in the same accusations as his predecessors.