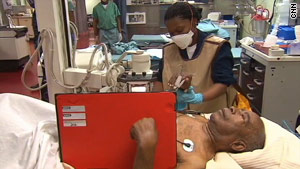 A patient is treated at the U.S. Navy hospital ship off the coast of Haiti.

Washington (CNN) -- Haitians being treated on a U.S. Navy hospital ship are requiring longer care than expected, forcing the U.S. and other international agencies to scramble for an alternative.

The solution involves plans for a 3,000- to 5,000-bed temporary hospital on land, for continued care, because the ship is reaching its treatment limit, according to Gen. Douglas Fraser, the senior officer in charge of military operations in South America.

The USNS Comfort, the Navy's hospital ship sent to assist in aid efforts, has performed more than 200 surgeries and treated more than 1,000 patients injured in the January 12 earthquake, and has been bolstering its medical staff to keep up with the demand.

"It's used up the clinical capacity before we reach the bed-space capacity," Fraser, commander of the U.S. Southern Command, said at a Pentagon briefing Thursday.

"The effort that we have ongoing right now for the discharge is looking to put together a facility where we have the ability to recover those patients -- and be able to provide them with that recovery space and time that they need," Fraser said.

He said the initial effort would be to make a temporary facility on land the Haitian government has identified, with the facility consisting of tents and cots and whatever other resources can be scrounged together.

Earlier this week the head of the U.S. military's aid relief in Haiti told reporters the military was assisting in getting together components of a large facility with 3,000 to 5,000 beds, to handle the health needs in Haiti.

Lt. Gen. P.K. Keen said the U.S. military would provide medical equipment, but the United Nations is working with other aid organizations to staff it and contractors to build it.

It's not clear where the hospital will be but military officials say it will be just outside of the capital, Port-au-Prince.

Some patients discharged from the ship to continue care at home have no home to recover in, according to witnesses.

Gen. Fraser said the U.S. government's joint task force in Haiti is working in a, "very concerted effort" to put the medical facility together.

The U.S. Navy is also taking care of patients on three other ships -- the USS Carl Vinson, a aircraft carrier; the USS Nassau; and the USS Bataan. The ships are supporting efforts in other parts of the quake-ravaged country and are complete with operating rooms and dozens of hospital beds and medical personnel.

"We'll look to see how we can improve this better. But it's an ongoing process because of the magnitude of the need, the difficulties as we're working through the infrastructure to meet the needs," Fraser said.

Fraser, talking about the cost of the operation, said he had not been placed under any financial limits. "The focus is on meeting the needs of the Haitian people," he said.

In response to criticism that there were still people who have not been able to receive food or aid, Fraser said he does not have an accurate number of how many or exactly where they might be.

"We're still having to move around and find those pockets for food distribution, and so it's really a communication and a continuing effort to get out to every spot that there is in the country," he said.