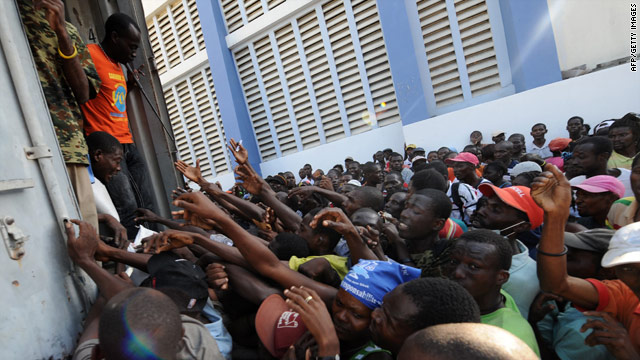 Haitians distribute aid from a truck on Wednesday in Port-au-Prince, Haiti.
STORY HIGHLIGHTS

Tune in to CNN on Friday night for a special edition of "AC360" to see the strength of Haiti's survivors, the hope of the people and how individual acts of heroism are helping to rescue a nation. "CNN Heroes: Saving Haiti," CNN Friday at 11 p.m. ET

Miami, Florida (CNN) -- Not all of the earthquake-traumatized Haitians are receiving the aid they need, a U.S. general said Thursday, partly because displaced residents are moving from place to place.

"We're still not up to meeting the needs of the Haitian people as far as the amount of supplies that are there. And so, there have been some instances, isolated, where we've been out to give distribution to citizens, there hasn't always been enough food," said Air Force Gen. Douglas Fraser, head of the Miami-based U.S. Southern Command.

He added: "We haven't anticipated the demand, I guess, at each site as we've gone out because the Haitians have -- have migrated around, if you will, from distribution site to distribution site, so we're finding pockets that we haven't been able to get in to."

He said the distribution is inconsistent, however, because there are areas where fresh fruit and plenty of food are available.

Video: Lights still out in Haiti

Another problem has been damage to the south pier of the port in Port-au-Prince, which is reducing the number of containers that can be unloaded there, Fraser said. The pier was damaged by new tremors on Wednesday.

The U.N. World Food Programme will expand its distribution points in Port-au-Prince from 12 to 15 on Friday, the general said.

There are hundreds of camps for displaced persons in the capital and surrounding areas following the devastating January 12 earthquake. Fraser said from 800,000 to about 1 million Haitians have lost their homes.

He said there was tremendous support from the international community, and "the relief efforts improve every day." One of the most popular items distributed recently is hand-cranked radios.

Fraser gave the report on the relief effort to Pentagon reporters via teleconference.

He said one of the most pressing needs was a place for patients in recovery, and that problem was being worked on.

When was asked how much the U.S. military effort was costing, he said he didn't know.

"I don't have an accurate assessment of the cost, primarily because it involves many parts of the Department of Defense," he said. He added President Obama and Secretary of Defense Robert Gates have said they will fund whatever he says is needed.

However, there appeared to be a somewhat different message Wednesday from Pentagon spokesman Geoff Morrell. When he was asked how much the Haiti operation was costing, he seemed to indicate that cost is now becoming a factor.

"You know, I think we're still working that. But I mean, you know, we've got 24 ships out there. You've got 15,000 personnel. You've got flights. This is a -- this is a very expensive operation.

"We have committed enormous capabilities towards this mission, and the meter is running. And so I don't know that we've gotten arms quite yet around how much, but -- you know, probably hundreds of millions of dollars."

As the general was making his comments, the Senate Foreign Relations Committee was discussing the enormity of the task of rebuilding Port-au-Prince, given the devastation.

"You have to have so many parts to coordinate," said Sen. John Kerry, D-Massachusetts, who chairs the committee. "And you've got to come in there with a new city planning concept. You've got to have a vision for what you want this place to look like.

"I don't see any entity at this point or movement ... that suggests to me the global community is coming together around that organizational effort the way that it ought to," Kerry said.

"This task is so massive that we need the 'international A-Team' working on this case," Farmer said.

Kerry said he believed the project could be pulled together to empower Haitians, and "we're going to press this concept."