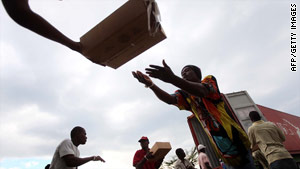 Workers unload food in a German government distribution program to help those displaced in earthquake in Haiti.
STORY HIGHLIGHTS

WFP will roll out food at 16 distribution points across Port-au-Prince, the United Nations agency said.

Each location will receive 42 metric tons of rice each for the next two weeks, and each family will receive a 25-kilogram ration of rice.

Only women will be allowed into the distributions sites to collect the food, WFP said. Women are receiving the food vouchers because they tend to be responsible for the household food supply, said WFP spokesman Marcus Prior.

"Our long experience in food distribution tells us that by delivering food into the hands of women, it is more likely to be redistributed equitably among the household -- including the men," Prior said.

The agency said it will work with its partners to ensure that men in need of assistance are not excluded.

The distribution sites will be set up with proper security, making it difficult for those not entitled to receive food to enter, he said. The WFP said the 16 fixed sites are a key step in establishing food security.

"It is the most complex challenge we have ever confronted, but this distribution system will not only allow us to reach more people, it will give us the qualitative step we need to facilitate the delivery of all kinds of humanitarian assistance in the weeks and months to come," WFP Executive Director Josette Sheeran said in a statement from Rome, Italy.

"Together with our NGO partners we are working with the local authorities, churches and other civil society organizations to ensure that all male-headed households and others with special needs are not excluded from these distributions," Prior said.

He said those attending the meeting were given coupons, which are being handed out to needy families in the districts drawn up around each distribution point.

The distribution will begin early Sunday. The two-week effort aims to reach 2 million people in Port-au-Prince but does not expand to those living in other quake-devastated cities like Leogane.

Aid distributions to outlying areas will continue, Prior said.

Multinational troops, including the U.S. military, will help secure food convoys and the distribution sites, Prior said.

CNN's Alec Miran and Moni Basu contributed to this report.