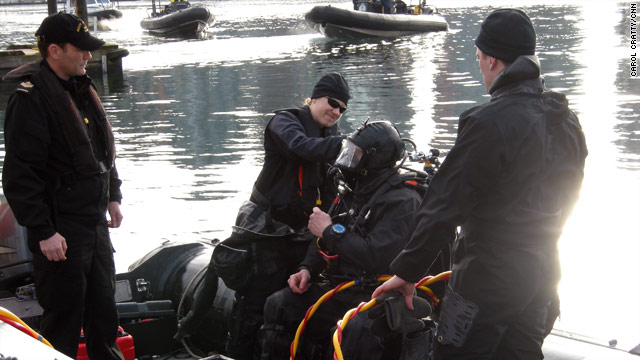 A diver from the Canadian Navy practices during a security drill in Vancouver, honing his bomb detection skills.
STORY HIGHLIGHTS

Vancouver, British Columbia (CNN) -- An Olympic security plan five years in the making is taking shape in Vancouver this week.

The Royal Canadian Mounted Police is heading up the $900 million security operation, the largest in Canada's history. It will involve 15,000 police, private security and military personnel. Bud Mercer, RCMP assistant commissioner, describes it as "planning for 17 Super Bowls in a row, day after day."

The Olympics will take place February 12 to 28 in the western Canadian city that is surrounded by water on three sides.

Political protests may pose the biggest threat to the games. The threat of a terrorist attack is rated as low.

Mercer, who is coordinating security, said the memory of the 1972 Munich Olympics has not gone away. That year, members of the Palestinian group Black September attacked the athletes' village, eventually killing 11 Israeli athletes and coaches.

It is no coincidence that in Vancouver security patrols are particularly evident around the low-rise apartment buildings where the athletes will be housed.

In downtown Vancouver, some roads are already closed, and rings of security fencing surround some key venues. Perched on top of the fencing is a network of 900 surveillance cameras to detect intrusions.

Container ships sit at anchor off Vancouver, the largest port in Canada. Several key Olympic sites are along the city's vast stretch of waterfront.

As Canadian Navy divers practiced the detection of underwater explosives, patrol boats fanned out across the harbor. Massive inflatable barriers keep small boats away from cruise ships, where some of the security personnel will be housed. They also protect the Cambie Street Bridge right next to BC Stadium, site of the opening and closing ceremonies.

Frigates and destroyers will monitor approaches to Vancouver Harbor, says Rear Adm. Tyrone Pile of the Canadian Navy, and a close eye will be kept on all ship traffic approaching the west coasts of Canada and the United States.

The goal is to keep the games safe but keep the port operating. Navy Lt. Bryan Price says, "It's going to be business as usual. We're going to see container ships coming in, the tugs and tows working their trade in the harbor."

Many of the skiing events will be held at the Whistler ski area, two hours north of the city. That will require a different set of security measures, including military patrols on snowmobiles, snow shoes and skis.

Only one road connects the city and the mountain, the picturesque Sea to Sky Highway. It is a potential choke point, so during the Olympics, access will be limited and security will be heavy. Mercer says there are so many resources at Whistler that security there can be self-sufficient if travel on the road is disrupted.

Because Vancouver is only 30 miles from the U.S. border, the United States is ramping up security as well. The air space restrictions in place around the Olympics dip deeply into Washington. The North American Aerospace Command, NORAD, will police it.

Customs and Border Protection has increased staffing 20 percent over the past 18 months and is building more booths to process travelers. Gregory Alvarez, the port director in Blaine, Washington, says CBP is ready to process 90,000 people a day and even has contingency plans to deal with a mass migration if there is a natural or man-made disaster.

More than 40 U.S. agencies will occupy a command center set up in an industrial warehouse in Bellingham, Washington. They will coordinate with Canadian authorities should the need arise.

Mark Beaty, the designated point person for the U.S. security effort, said, "These are Canadian games ... they are our neighbors. They are right next door, so if it happens to one, it's going to affect the other immediately."

Despite five years of planning and the massive infusion of personnel and equipment, U.S. and Canadian officials hope the security is not overly obvious.

They don't want visitors to take away impressions of omnipresent police. They want the memories to be about the athletes, the Olympic Games and the natural beauty of British Columbia.