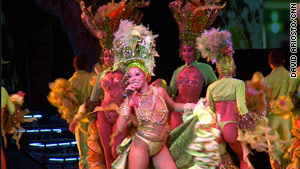 The gambling is gone, but cabaret singers and scantily dressed dancers still are big draws at the Tropicana.

"Excuse me," she said, slipping past a group of ogling tourists who puffed expensive cigars and sipped freshly minted mojitos during a show at the Tropicana, one of Havana's premier nightspots.

Once a playground for American mobsters like Meyer Lansky and Santo Trafficante Jr., the famed Vegas-style haunt turned 70 this year and is still alive and kicking.

"We always wanted to come to the Tropicana," said one sunburned Canadian tourist. "It's supposed to be one of the best Cuban shows on the island."

The club first opened its doors in December 1939 near a Jesuit school that a wealthy landowner's then-13-year-old son named Fidel Castro would later attend. A glitzy reputation for showgirls and gambling quickly followed the opening of the Tropicana.

Much like the classic cars that still rumble down Cuba's roads, the place hints of a time long since past.

Baritone legend Nat King Cole performed there, and the place was once a favorite among golden-age Hollywood stars including Marlon Brando and Elizabeth Taylor.

In his 1958 spy novel "Our Man in Havana," British author Graham Greene recalled a scene in which "chorus girls paraded 20 feet up among the great palm trees, while pink and mauve searchlights swept the floor."

But at 70, the Tropicana is drawing a different clientele than the tuxedoed, celebrity-studded crowds from its heyday. These days, mostly European and Canadian tourists -- many participants in packaged tours, often sporting loud floral shirts -- are drawn to the Tropicana.

Cabaret singers and scantily dressed señoritas still perform a Latin-style extravaganza, but the sin and sizzle of its pre-revolutionary era are gone.

"Before the triumph of the revolution, this was a place dedicated to gambling and all kinds of games," said Tropicana director David Varela, standing where craps tables and roulette wheels were once only a few steps away.

After Fidel Castro's revolution in 1959, the Tropicana and other iconic nightspots came under state control and all bets were off.

The club's famed gambling and casinos were outlawed.

In 1960, all U.S.-owned businesses in Cuba were nationalized and the breakdown in diplomatic relations between the two countries that followed would echo for the next half-century.

Capitalizing on the nightclub's past international fame, Cuba now runs a more family-friendly version of the Tropicana at an entrance fee of about $80 per head, a price nearly four times the monthly state salary of most Cubans.

Still, guests often fill the 850-seat show and seem to enjoy themselves, despite the lack of gambling.

"It's very good music," said Sten, a Norwegian tourist on a package tour. "Dancers with not very much clothes, but very nice to see."