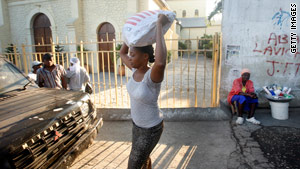 Nearly 160,000 Haitian women each collected a 25-kilogram (55 pounds) bag of rice under a distribution plan coordinated by the United Nations, several private humanitarian agencies and the Haitian government.

The effort was launched Sunday but not all 16 fixed distribution points around the capital were operational until Thursday.

So far, 600,000 people affected by the devastating January 12 earthquake have been able to collect food under this plan, said Marcus Prior, spokesman for the United Nations World Food Programme.

"We're encouraged by the way the system is working to get food out into the city to those in need, but still have a long way to go," Prior said.

Only women were given food coupons beforehand and allowed to stand in line to collect for their families.

"Our long experience in food distribution tells us that by delivering food into the hands of women, it is more likely to be redistributed equitably among the household -- including the men," Prior said.

U.S. and U.N. troops have been keeping strict control over the crowds. Prior said the distribution plan has been orderly so far.

More than 300,000 people were injured and more than 1 million were made homeless, he told CNN's "Larry King Live."