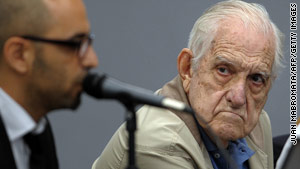 (CNN) -- Prosecutors asked Wednesday for a 25-year sentence for Argentina's last dictator, who is on trial on charges that he violated human rights during his 17-month rule in the early 1980s.

Former Gen. Reynaldo Benito Bignone is accused of torturing 56 people and depriving them of their liberty, as well as committing illegal searches. He ruled Argentina from June 1982 until the nation's return to democracy in December 1983.

More than 100 people have testified at his trial since it started in November, the government's Judicial Information Center said. The trial is expected to last until March.

Prosecutors also asked for 25-year sentences for Verplaetsen and Riveros and a 20-year incarceration for Tepedino, the Judicial Information Center said. They want sentences of 12 years for Perello and two years for Montenegro.

Up to 30,000 students, labor leaders, intellectuals and leftists who ran afoul of the dictatorship because of their political views disappeared or were held in secret jails and torture centers during the eight-year "Dirty War."

Bignone, 82, has been under house arrest. He faces two other trials: in the abduction and disappearance of doctors and nurses at the Hospital Posada and of two soldiers when he was head of the Military College.

The three-judge panel in the current trial was scheduled to hear testimony Wednesday from two groups representing Argentineans who were victims of the Dirty War.

Trial will resume February 25 with the first defense testimony, the Center for Judicial Information said.