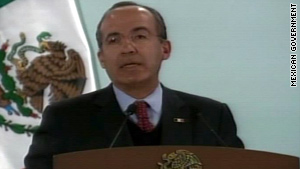 Mexico City, Mexico (CNN) -- On a visit to the border city of Ciudad Juarez, Mexico, President Felipe Calderon apologized to the families of 15 people killed in a massacre last month and promised residents that their input would form part of the strategy against drug-related violence.

After meeting with the families, Calderon and local political and civic leaders presented a variety of ideas, critiques and proposals on how to stabilize a city that saw more than 2,500 killings last year and more than 230 so far this year.

Juarez is one of the front lines in Calderon's offensive against the country's major drug trafficking organizations. The violence in Juarez is a result of a bloody turf war between the Juarez drug cartel and the Sinaloa cartel over lucrative smuggling routes into the United States.

Many of the killings are between rival gangs, something that Calderon's government hinted at in the aftermath of the January 31 massacre of a group of young partygoers that shocked the city.

In this case, it turned out that mistaken identity was behind the incident and that the youths killed were innocent. On Thursday, Calderon apologized and gave his condolences to the victims' families for suggesting that their children were somehow involved.

The president also responded to criticism that the security strategy in Juarez was being imposed by politicians from afar with little understanding of their city.

"I come mostly to listen," Calderon said, adding "we're looking for solutions from Juarez because you are the ones living it."

We're looking for solutions from Juarez because you are the ones living it.
--Mexican President Felipe Calderon
RELATED TOPICS

Representatives of different sectors of the city's civil society -- security, human rights, religious -- took turns giving their proposals in front of Calderon and a tense crowd.

Many speakers were interrupted by heckling or criticisms from the crowd.

When Juarez Mayor Jose Reyes Ferriz addressed the measures his government has taken to secure the city, some in the crowd booed and responded that he resides on the other side of the border, in El Paso, Texas.

Before the meeting, police forcibly removed some protesters that were lined up outside of the building where Calderon would speak. Several of the audience members interrupted the meetings by yelling protests against the way the young demonstrators were treated.

Arturo Valenzuela, a doctor who represented the security sector, said that security operations in Juarez to date have failed. Calderon has dispatched thousands of soldiers and federal police officers to supplement local police forces.

He recommended the appointment of one leader who would coordinate among local, state and federal agencies involved in securing the city.

"The way the operation is currently structured, it will never work," Valenzuela said.

He also highlighted other security problems outside of the killings. Kidnappings increased 3,000 percent in 2009, he said, and most business owners are extorted by organized crime.

A speaker representing the human rights sector, Lorenza Patricia Galarza, said the military was responsible for 1,000 human rights violations and should be removed from Juarez.

Calderon said he will not tolerate military abuses and challenged Galarza to present evidence of the abuses she cited.

The military, at least for now, is not going anywhere, Calderon made clear.

Violence in Juarez comes amid a backdrop of vastly increased numbers of homicides nationwide, as drug cartels battle each other and the Mexican government steps up its efforts to combat them.

Officials say more than 16,000 Mexicans have died since Calderon declared war on the drug cartels shortly after taking office in December 2006.