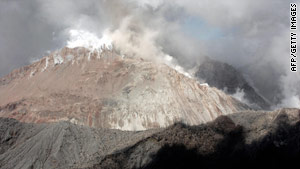 Santiago, Chile (CNN) -- Chile's Chaiten volcano has been placed under red alert due to an increase in seismic activity for three weeks, the Chilean government said.

The volcano in southern Chile became active in May 2008 after being dormant for more than 9,000 years.

Volcanic activity was on the decline in the past few months until picking back up January 21, the Chilean Interior Ministry said in a news release Monday.

The red alert, which indicates activity is above normal levels and an eruption could be imminent, was enacted in large part to protect tourists in the area, said Carmen Fernandez, director of Chile's National Emergency Office.

Underground seismic rumblings 1.2 to 5 miles (2 to 8 kilometers) deep in the area around the volcano and constant gas eruptions in the dome indicate "a high grade of instability," the National Emergency Office said.