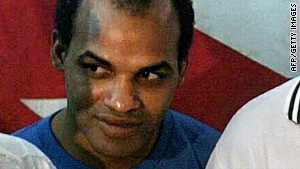 "He got much worse last Tuesday and was brought to Havana," said Laura Pollan, one of the leaders of the Ladies of White, a group of wives and relatives of political prisoners.

According to Pollan, Zapata, 42, went on strike to demand a separate cell from common criminals and permission for his family to bring him food. She said he also refused to wear the prison uniform.

He was transferred from his prison in central Holguin province to a prison in Havana when his health deteriorated, and eventually to a hospital in the capital, she said.

"For us, this is a terrible situation," Pollan said in a telephone interview. "We didn't think this government would let a political prisoner die at this point in time, but we were wrong."

Zapata was arrested in 2003 during a crackdown on dissidents, Pollan said.

According to an Amnesty International report, he was jailed for disorderly conduct among other crimes.