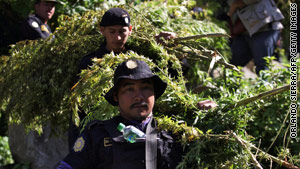 Washington (CNN) -- Marijuana cultivation in Mexico increased 35 percent in 2008 and continues to grow, even as authorities there push forward with a large offensive against drug cartels that smuggle the product into the United States, according to a State Department report released this week.

The 2010 International Narcotics Control Strategy Report (INCSR), is a yearly report that assess anti-drug efforts around the world. The part of the report dealing with Mexico is illuminating because most of the illegal drugs in the United States are transported and smuggled through there.

"There's a broad impact in the United States of cartel operations that are based or emanating from Mexico," Assistant Secretary of State David T. Johnson said at the news conference where the report was released.

The report could be additional fuel for critics who say that Mexican President Felipe Calderon's war against the drug cartels has been ineffective at stopping the drug violence or the flow of illegal drugs.

"Despite the efforts of the (Mexican government), drug cultivation rose significantly in 2009 according to U.S. government agencies' estimates," the report stated.

The 35 percent increase is the most recent statistic available, and marks a 16-year high.

"Much of this can be attributed to Mexican law enforcement's shift in focus to harder drugs such as methamphetamine as well as more military and law enforcement resources being diverted to confront the (cartels) and violence," the report said.

In the State Department's assessment, Mexico fared better in other areas.

By November of last year, Mexico had already seized more metric tons of cocaine than in 2008, 20 compared to 19. More opium gum had also been seized.

There were 36,332 total drug-trafficking arrests made in 2009, a new record for the country, the report stated.

Mexico also set a new record for people extradited to the United States, with 100 people sent to face the U.S. justice system, compared to 95 in 2008.

Meanwhile, drug production in Colombia, another key international player in the drug trade, decreased, according to the most recent statistics.

"I'd say that of the three major coca-producing states in the Andes, Colombia continues to have significant declines, although it remains by far the largest producer," Johnson told reporters. "Peru had a modest increase. And Bolivia has a continuing trend of a step up per year in the neighborhood of 10 to 15 percent that's taken place over the course of the last several years."