Brazil, U.S. at odds over Iran 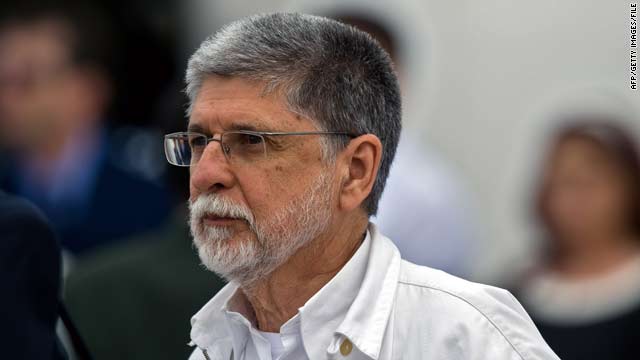 (CNN) -- Brazil "will not bend" to U.S. pressure to seek sanctions against Iran, Brazilian Foreign Minister Celso Amorim said after a meeting with U.S. Secretary of State Hillary Clinton in Brasilia.

The United States was seeking support for sanctions against Iran, which it accuses of harboring a non-peaceful nuclear program. Brazil shares the table with the United States on the United Nations Security Council, where it holds a non-veto seat.

"We think with our own mind. We want a world without nuclear arms, certainly without proliferation," Amorim said at a news conference with Clinton on Wednesday, according to the official Agencia Brasil news agency. "It is not about simply bending to an opinion that may not be true. We can't simply be taken along. We have to think with our own head."

During her remarks, Clinton reiterated the case for new sanctions, saying that Iran is not likely to engage in negotiations over its nuclear program until after sanctions are in place.

Clinton said Iran is trying to stall the international community.

Amorim countered that there is still time for negotiations, and that a uranium swap deal remains a possibility.

The United States is proposing tough new sanctions on Iran at the U.N. Security Council in an effort to persuade Iran to stop uranium enrichment and negotiate with world powers over its nuclear program, senior U.S. officials and Security Council diplomats said.

Video: 'We know how to respond'

The United States and its allies are discussing the measures as part of a possible fourth Security Council resolution against Iran over its nuclear program.

The sanctions focus on the Iranian Revolutionary Guards Corps, which has vast business interests in the country.

The sanctions would center around the banking, shipping and insurance sectors of the Iranian economy, broadening the scope of the sanctions in the three previous U.N. security resolutions.

While existing sanctions call on U.N. members to exercise "vigilance" or "restraint" on trade, the sources said the proposed new sanctions call for an outright ban on certain transactions with Iran.

The United States wants to gain the support of Russia and China to negotiate the proposed sanctions draft.

The United States and its allies hope that China will voice its support in talks with Deputy Secretary of State James Steinberg in Beijing this week.

CNN's Elise Labott and Adam Levine contributed to this report.