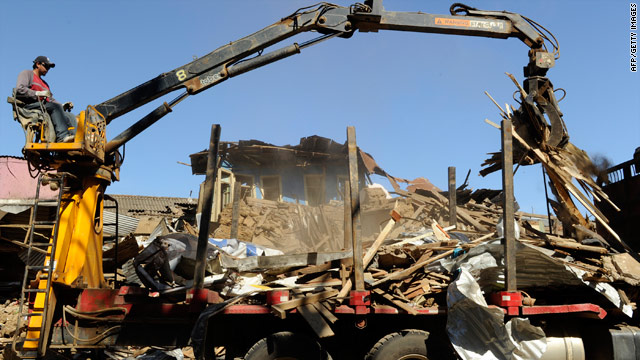 Concepcion, Chile (CNN) -- The death toll in Chile was revised downward Thursday as authorities reviewed discrepancies in the reported number of dead in the Maule region.

Deputy Interior Minister Patricio Rosende said the casualty count in Maule, originally reported at 587, included more than 200 people who are missing but not confirmed dead. Therefore, the official nationwide death toll is lower than the 802 figure given by emergency authorities.

In an attempt to reduce confusion, Rosende read aloud the names of 279 Chileans who had been killed and identified by Thursday evening. He said he would update that official number regularly. This new tally does not account for hundreds of unidentified victims.

With disasters of this magnitude, "the number of dead change daily," Rosende said. "It takes months sometimes to compile the information because one of the biggest problems in the affected areas is the lack of precision and uncertainty at the scene."

He called Chileans to fly the country's flag outside their homes as a sign of solidarity for the earthquake's victims.

Bachelet first visited the battered seaport of Talcahuano, where a quake-induced tsunami roared through many parts of the city.

Wearing a blue windbreaker and surrounded by military, local dignitaries and TV cameras, Bachelet walked for several blocks before stopping to make a lengthy statement.

"This is the time for action," Bachelet said upon her return to the capital Thursday afternoon, where she met with leaders of the Catholic Church.

The church has been a partner in providing help in the quake's aftermath.

The top priority remained the needs of those affected, followed by reconstruction efforts, the president said.

"Despite the adversity, despite the challenges, Chile will come out on top," she said.

Monsignor Alejandro Goic shared a note from Pope Benedict XVI expressing sadness for the tragedy and supporting the Chilean people.

"This is the time for unity," Goic said.

Talcahuano, the nearby city of Concepcion and other parts of the region were the hardest-hit areas and the scene of days of looting and lawlessness. Many residents, including the mayor of Concepcion, complained that federal aid was slow in arriving.

Some aid still had not arrived Thursday.

"Today we have not received one measure of water from the National Emergency Office, understanding that there are some difficulties," said Eduardo Soto, mayor of Rancagua in central Chile.

Bachelet dispatched more than 13,000 soldiers and other military personnel to restore order in the area. Food and water started to arrive late Tuesday in Concepcion, and officials said they distributed 3,500 aid packages on Wednesday.

President-elect Sebastian Pinera does not take office until March 11, but he named six officials Thursday to head up recovery efforts.

In other developments, the Chilean Davis Cup tennis team will open competition in Coquimbo, Chile, against Israel on Saturday, not on Friday. Team officials and players said they would be playing in honor of the quake's victims and that they hope to bring the country happiness.

Also Thursday, a 6.3-magnitude earthquake hit northern Chile, the opposite part of the country devastated by last week's quake. No immediate reports of damage or injuries have been made.

A telethon, dubbed "Chile Helps Chile" by organizers, was slated for Friday to raise funds for quake victims.

A 4.9-magnitude aftershock struck near the already devastated Maule region about 1:30 a.m. Thursday, according to the U.S. Geological Survey.

It came hours after a 6.1-magnitude aftershock struck near Valparaiso, raising fears that already vulnerable buildings could topple.

Concepcion is less than 10 miles inland from Talcahuano, but the two towns suffered very different fates. In Concepcion, fatalities and injuries resulted largely from buildings that had collapsed.

In coastal Talcahuano, the damage was caused by a tsunami that roared into town about an hour after the quake. When the waters receded, they left large boats stranded inland. In one spot, four shrimping vessels were stacked on top of each other.

Much of the port city looked as if a bomb had exploded in it, with buildings reduced to rubble.

The greatest number of deaths occurred in the Maule region, where disaster also visited two cities in different ways.

In the central city of Talca, an ancient municipality, the earthquake wiped out many older adobe structures, crushing hundreds of residents. Thursday's early morning aftershock struck about 40 miles north of Talca.

In the seaside town of Constitucion, survivors tried to hold on to the little that remained. Saturday's earthquake had flattened rows and rows of homes, leaving a path of destruction that led to the sea.

Many residents had left, but Sofia Monsalve Gutierrez and Emilio Gutierrez stayed near the concrete slab that used to be their home. On Wednesday, they were searching for their 4-year-old son.

They had not seen him since he ran from their home and jumped into a boat during the massive earthquake.

"If you know my son, please keep pictures of him. I don't have any pictures left of him. It's very important to me," the mother said.