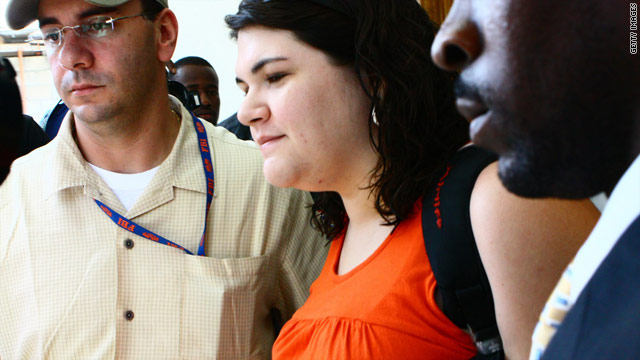 Port-au-Prince, Haiti (CNN) -- After more than a month in a Haitian jail, an American missionary was free Monday night, looking forward to a hot shower and a long night in bed on home soil.

But Charisa Coulter's heart remains in Haiti, her father said, because her best friend, Laura Silsby is now alone behind bars.

Haitian Judge Bernard Saint-Vil released Coulter on Friday. She walked out of judicial police headquarters in Port-au-Prince and headed to the nearby airport for a flight to Miami.

Coulter is staying in a hotel by herself, her father said. He did not know when she might return home to Boise, Idaho.

He said his daughter had been through a "trying experience" and was welcoming the solitude.

Coulter, Silsby and eight other Americans had been detained in Haiti on suspicion of kidnapping 33 children after the killer earthquake January 12.

Last month, Saint-Vil released the eight others, but Silsby and Coulter remained in custody because the judge wanted to learn more about their motives. On Friday, Silsby was brought into Saint-Vil's office for further questioning.

The missionaries were stopped by Haitian authorities on January 29 as they tried to cross the border with 33 children without proper legal documentation. The group said it was going to house the children in a converted hotel in the Dominican Republic and later move them to an orphanage.

Saint-Vil recently traveled to the Dominican Republic to see where Silsby said she intended to open an orphanage.

Silsby originally claimed the children were orphaned or abandoned, but CNN determined that more than 20 of them had at least one living parent. Some parents said they placed their children in Silsby's care because that was the only way they knew to ensure a better quality of life for them.

Silsby said she was "very happy that Charisa went home today." She expected her freedom would soon follow.

"I came here to help these children," she said.

CNN's Lonzo Cook and Sara Sidner contributed to this report.