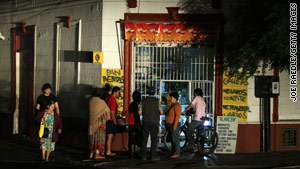 People in Santiago, Chile, gather outside a store after a power outage hit most of the country Sunday.
STORY HIGHLIGHTS
RELATED TOPICS

Santiago, Chile (CNN) -- Much of Chile was in the dark Sunday after a blackout knocked out power to 90 percent of the country, CNN's sister network in the country reported.

The blackout was caused by an overheated transformer in the Bio Bio area, the country's minister of energy, Ricardo Rainien, told CNN Chile. Rainien said crews were slowly restoring power, and he expected electricity to be fully restored by midnight Sunday.

Subway service was also affected, CNN Chile said, but all passengers had been evacuated from stopped trains as of Sunday night.

Government officials were asking residents to stay calm and remain in their houses until power is restored.

The blackout comes two weeks after a massive 8.8-magnitude earthquake struck the country, killing more than 500 people. Aftershocks as high as magnitude 7.2 continue to disrupt recovery efforts. iReporters recovering after the quake

Rainien said that another blackout is possible because of the weakened electrical system following the quake.