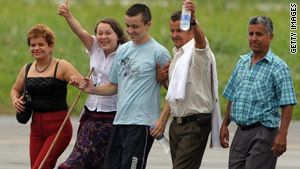 Josue Daniel Calvo with his family after his release.
STORY HIGHLIGHTS
RELATED TOPICS

(CNN) -- A Colombian soldier held by Colombian rebels for more than 11 months was released Sunday.

Josue Daniel Calvo was reunited with his family on a tarmac in the city of Villavicencio, where the helicopter that retrieved him touched down.

The young soldier was released to a humanitarian mission led by Colombian Sen. Piedad Cordoba. Calvo became dizzy and sick on the helicopter ride, but he was in better health than they expected, Cordoba said at a news conference.

The soldier walked from the helicopter with his family with the aid of a walking stick. Calvo was very happy to be back with his family, Cordoba said.

Cordoba said she hopes that the FARC will release another hostage, Sgt. Pablo Emilio Moncayo, on Tuesday.