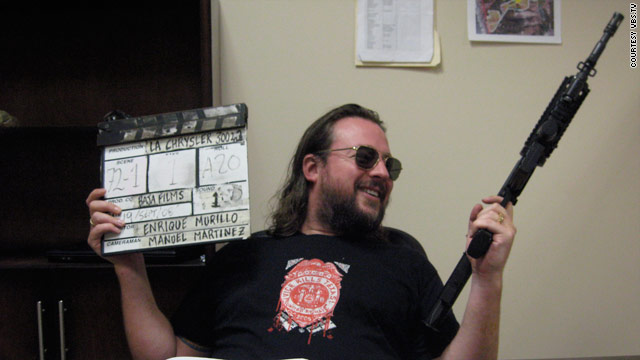 Editor's Note: The staff at CNN.com has recently been intrigued by the journalism of VICE, an independent media company and Web site based in Brooklyn, New York. VBS.TV is broadband television network of VICE. The reports, which are produced solely by VICE, reflect a transparent approach to journalism, where viewers are taken along on every step of the reporting process. We believe this unique reporting approach is worthy of sharing with our CNN.com readers. Viewer discretion is advised.

(VBS.TV) -- For this installment of the Vice Guide to Film series, VBS co-founder Shane Smith traveled to Texas, Tijuana and Mexico City to immerse himself in the seedy, fast-paced, and vastly prolific and amusing world of films inspired by -- and often funded by -- Mexico's ultraviolent drug cartels, a genre known as narco cinema.

Mexico has long been the superhighway of drugs into North America. It supplies most of the meth, marijuana, cocaine and poppy derivatives consumed in the United States, and today the Mexican drug trade is a $100 billion a year industry. About 30 percent of this figure is reported to be repurposed as bribes to government officials and law enforcement.

It's really no surprise at all that drugs permeate every level of Mexican society, from religion (yes, there is a patron saint of drug trafficking) to music, and film is by far one of the most naturally gratifying mediums for the fictitious high-flying antics of outlaw traffickers. Today there is a constant flow of B-movie releases featuring drug dealers, good cops, bad cops, women, cocaine and a lot of big trucks. These films love big trucks.

See the rest of Mexican narco cinema at VBS.TV

Narco cinema was born in the 1980s, taking a cue from the B-movie tradition of the Mexican cinema of the '60s and '70s. The movement soon turned to action, guns, trucks, cars, explosions, women, and drugs. Because 82 percent of the Mexican population can't afford to see these films, cheap, straight-to-video accessibility helped it become increasingly popular. Watching these films is now a national pastime.

Shane decided he needed to be in one of these movies.

In time he found Enrique Morillo, one of the biggest directors in the industry, who happened at the time to be shooting two sequels to his hit "Chrysler 300" (while the eponymous vehicle is a sedan and not a truck, it does get chased by a lot of trucks in this franchise).

Morillo invited Shane to the shoot and to play a role. Shane accepted, picked up a python-skin jacket and cowboy hat and hired a band to sing drug-running songs about him for moral support. Narcocorridos, as these types of songs are called, are the musical equivalent of narco cinema, and are often the basis for many popular films.