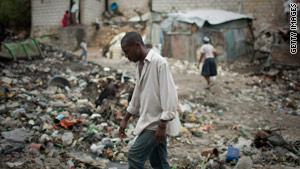 The United States has halted deportation to Haiti in response to the devastation of the earthquake.
STORY HIGHLIGHTS
RELATED TOPICS

(CNN) -- Thirty-three Haitians were released Thursday from immigration detention facilities in Florida, more than two months after they arrived in the United States lacking proper immigration papers in the aftermath of their country's devastating earthquake.

The 33 were among 65 Haitians detained since entering the country without visas after the January 12 earthquake. Thirty-two continue to be held.

Many of those freed Thursday were released to family members already living in the United States, but they will remain under supervision of federal immigration officials.

Most of those detained came to the United States on military planes, according to Florida Immigrant Advocacy Center attorney Allison Kent.

Kent and her colleagues at the center, along with a team of law students from across the country, started working on the release of the Haitians in February.

Some of the detainees told Kent that after a violent aftershock in Haiti, U.S. Marines waved them onto a military plane waiting at the Port-au-Prince airport. Kent said others went to the airport in search of food and aid and ended up in a line to board a plane out of the country.

At no point did anyone on the ground ask to see the necessary visa documents for the Haitians to enter the United States legally, Kent said.

A Department of Homeland Security official who asked not to be identified did not discount the stories, saying that it was a very chaotic situation after the earthquake. But the official added that there were instances where individuals intentionally tried to gain access to the United States illegally.

While all the Haitians released Thursday still face deportation orders, the United States halted deportation to Haiti in response to the devastation of the earthquake. No timeline has been set for their removal, according to a DHS official.

The advocacy center called the detention of the Haitians unnecessary without a deportation date and claimed that many of them showed signs of depression, anxiety and post-traumatic stress disorder.

"Our clients' prolonged detention only exacerbated the terrible trauma they had already suffered before fleeing Haiti," said Cheryl Little, center executive director. "While we're obviously thrilled and grateful that this group will finally be able to attempt to recover from their horrific experiences, it's difficult to understand why they weren't released sooner."

"In order to mitigate the probability that Haitians may attempt to make a potentially deadly journey to the U.S., we clearly articulated that those who traveled to the U.S. illegally after January 12 may be arrested, detained, and placed in removal proceedings," said Immigration and Customs Enforcement spokesperson Brian P. Hale.