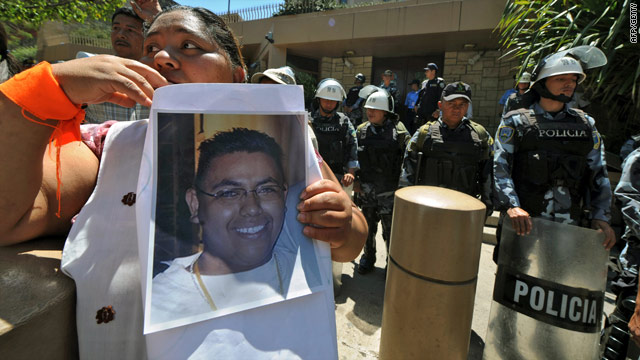 (CNN) -- Honduras suffered nine months of political turmoil after a military-led coup removed the elected president. Now, it joins Mexico, riddled with drug violence, as the deadliest place for journalists working in the Western hemisphere.

The recent killings of five Honduran journalists have spurred outrage from human rights groups, who say the violence has led to widespread self-censorship in the local media.

"We call on Honduran authorities to put an end to this unprecedented wave of violence against the press," said Carlos Lauria, senior program coordinator for the Americas for the Committee to Protect Journalists (CPJ).

"These attacks are seriously restricting freedom of expression and undermine citizens' right to be informed on issues of public interest," he said.

Unidentified gunmen in a vehicle pulled alongside the journalists' car and fired at least 26 times. Mairena died at the scene; Juarez died later in a hospital in Juticalpa.

"Such despicable crimes against media professionals undermine the fundamental right of freedom of information, cornerstone of a democratic society," said Irina Bokova, director-general of the United Nations Educational, Scientific and Cultural Organization (UNESCO), the U.N. agency that deals with press freedoms.

A recent UNESCO report found that rising numbers of journalists are being killed worldwide, mostly in countries that are at peace.

A record 77 slayings were reported by UNESCO last year, including the killing of about 30 journalists in one day during an ambush in the Philippines last November.

"Sadly, the frequency of acts of violence against journalists is increasing," the report said. "In most cases, impunity precludes the way of justice, and if this trend prevails, journalists will remain easy targets.

"Needless to say this represents a severe threat to freedom of expression and to our ability to seek the truth."

Journalists are among the victims of a wave of terror in Honduras since the June 29 coup.

Three Honduran political activists opposed to the coup were slain last month, according to the Inter-American Commission on Human Rights. The panel has also reported kidnappings, arbitrary detentions, torture, sexual violations and illegal raids against members of the political resistance.

Honduras returned to democracy in January, and the newly installed government of President Porfirio Lobo Sosa bears responsibility for safeguarding civil liberties and human rights, said the commission, an autonomous agency of the Organization of American States.

CPJ, a New York-based independent agency that promotes press freedoms around the world, is investigating whether the killings of the Honduran journalists were related to their work.