Castro: Cuba won't 'give in to blackmail' 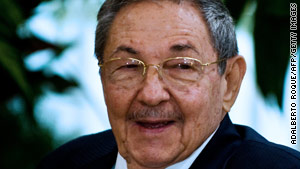 Cuban President Raul Castro said his country would "never give in to blackmail" from any nation.

Havana, Cuba (CNN) -- Faced with international criticism over hunger-striking dissidents, President Raul Castro on Sunday said Cuba refused to give in to blackmail and accused the United States and Europe of launching "the most ferocious" media campaign against the island nation in decades.

"We will never give in to blackmail, from any country or group of countries, no matter how powerful," he said in a nationally televised speech.

The United States and Europe have stepped up pressure on Cuba to release political prisoners and improve its human rights record.

In his speech to an annual meeting of the Union of Communist Youth on Sunday, Castro accused the United States and Europe of "hypocritically holding up the flag of human rights."

He called both Zapata Tamayo and Farinas common criminals who were manipulated by foreign powers.

Cuba says there are no political prisoners on the communist island. They say dissidents are being paid by enemy governments to destabilize the country.

Farinas has been in the hospital in recent days, receiving food intravenously.