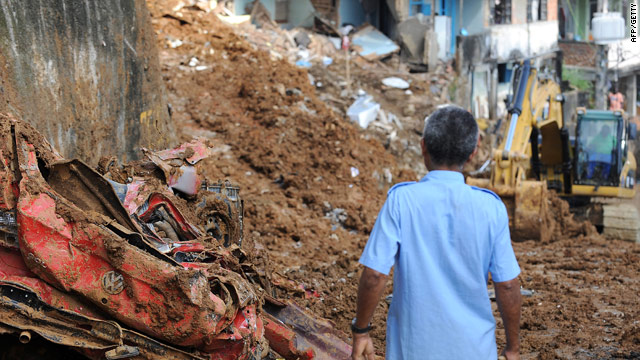 (CNN) -- Brazilian President Inacio Lula da Silva said Monday the government will do everything possible to help victims of flooding and mudslides that have killed at least 229 people and left thousands homeless.

Lula said he will immediately make available 200 million Brazilian reais (about $112 million) in emergency funding to the state of Rio de Janeiro, where heavy rains that started Tuesday have caused widespread death and destruction.

"We can now say that the Brazilian people are saddened by what has happened in Rio de Janeiro and asking God, praying much, that it stops raining and Rio can return to normality," Lula was quoted as saying by the state-run Agencia Brasil news service.

The largest number of victims from Wednesday's landslides have occurred in the city of Niteroi, where 146 people have died, Agencia Brasil said Sunday evening, citing fire department officials.

An additional 150 people are believed dead and still buried in the mud in Niteroi, the news outlet said.

Niteroi is located across the bay from the city of Rio de Janeiro.

Another 63 people have died in the state of Rio de Janeiro, fire officials said. In addition, 16 deaths have been recorded in the city of Sao Goncalo, adjacent to Niteroi, and one each in Petropolis, Paracambi, Mage and Nilopolis, authorities said.

More than 160 people have been injured and about 5,000 have been left homeless, officials said.

Many of the deaths have occurred from mudslides in flimsy shantytowns built on the sides of hills overlooking the metro Rio area.

Rio state Governor Sergio Cabral said Brazil would invest 1 billion reais (about $562 million) to construct housing, Agencia Brasil reported. The money, he said, will come from nearly 5 billion reais (about $2.8 billion) set aside in the national treasury for construction connected with the 2012 World Cup and the 2016 Summer Olympics, both of which Brazil will host.

More rain was forecast for Monday and the next few days.