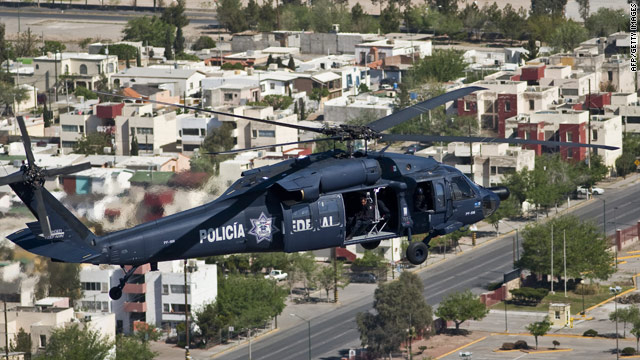 Mexican states along the U.S. border have seen some of the worst violence. This police helicopter flies over Juarez last week.
STORY HIGHLIGHTS
RELATED TOPICS

Mexico City, Mexico (CNN) -- At least nine people died in shootouts over the weekend in northeastern Mexico, an area where two drug cartels have been waging a bloody war since January.

One gang-related death was recorded in the municipality Saturday during a firefight between soldiers and a group of armed men, the government's information center said.

The area, which borders Texas, has seen ferocious fighting between the Zetas and Gulf cartels after a recent gangland slaying. Hours-long gun battles are common, and U.S. officials were recently forced to temporarily close the consulate in Reynosa, another city in Tamaulipas state.

The Zetas, composed mostly of former elite military troops, had been the armed enforcers for the Gulf cartel since 2001. They have become more independent in recent years, and the all-out war between the two cartels indicates the split is apparently permanent.

Mexican authorities said Monday that the Gulf cartel has reached an alliance with the Familia Michoacana drug organization to fight the Zetas.

Federal police made the observation in an announcement about the arrest of a top Familia Michoacana lieutenant and two other suspects.

Cartel suspect Jose Manuel Cuevas Arias, known as "el Borrego," was the Michoacan organization's leader in the state of Guanajuato, the federal police agency said on its Web site.

The states of Michoacan and Guanajuato border each other in southern Mexico.

Cuevas Arias, 31, is accused in the deaths of four federal police officers, the agency said.

The weekend violence in Tamaulipas was the latest in a string of bloody killings in the state. Earlier this month, five men and two women were killed in the city of Tampico.

The most violent day this year occurred March 30, when 18 people died in drug-related violence, the state government said.

No official figures are available, but media tallies this year say more than 17,000 people have been killed nationwide since Mexican President Felipe Calderon declared war on the drug cartels shortly after taking office in December 2006.

Ciudad Juarez, in northern Mexico across from El Paso, Texas, is the most violent city in the nation, with more than 2,600 drug-related deaths in 2009. No official numbers are available, but more than 400 killings have been reported by local media this year.

The city, long the focal point of Calderon's battle against cartels, came to renewed prominence after the January 31 killings of 15 people, most of them students with no links to organized crime. The massacre sparked outrage throughout Mexico and drew worldwide attention.

The Mexican government apologized to the families of the two students and promised an investigation into how they were killed.