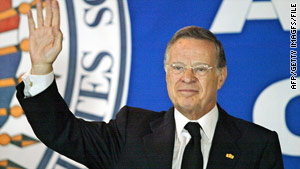 Miguel Angel Rodriguez stepped down as secretary-general for the Organization of American States after being charged.
STORY HIGHLIGHTS
RELATED TOPICS

(CNN) -- A trial started Wednesday for a former Costa Rican president and eight others accused of taking bribes to award a $149 million government mobile phone contract.

Miguel Angel Rodriguez, who was president from 1998-2002, is accused of receiving more than $600,000 in payments from the French company Alcatel in exchange for helping the telecom obtain a contract in August 2001 with the Costa Rican Electricity Institute, commonly known as ICE.

Rodriguez, who was secretary-general for the Organization of American States in 2004 but resigned after being charged, has denied the accusations.

Rodriguez, 70, held a news conference before the trial started, thanking supporters for their backing during the past 5½ years.

Former Alcatel executive Christian Sapsizian admitted to a $2.5 million bribery scheme for the contract and has been sentenced to 30 months in U.S. federal prison, the Justice Department said in 2008. He was charged in the United States with violating the Foreign Corrupt Practices Act.

The company's American depositary receipts were traded on the New York Stock Exchange.

Alcatel paid $10 million in March as part of a $52 million civil suit the Costa Rican attorney general's office filed against the company in relation to the scheme, the Tico Times newspaper reported last month.

Wednesday's trial was adjourned until Monday because one of the defendants is ill.

In addition to Rodriguez, the defendants include former high-government officials.