'Godfather' of Cuban tobacco dead at 91 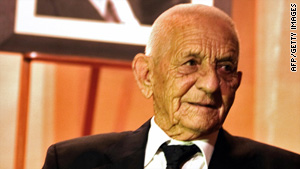 "For me tobacco growing had to be in the family, done with love," Alejandro Robaina told CNN in 2008.
STORY HIGHLIGHTS
RELATED TOPICS

Robaina was 91. He was diagnosed with cancer last year and died on his farm in the western Cuban province of Pinar del Rio, said Habanos spokesman Jose Antonio Candia.

Robaina's tobacco leaves are considered some of the best in the world. In Cuba, he was called "The Godfather." His deeply wrinkled face smiled out from billboards, T-shirts and boxes of Vegas Robaina cigars, among Cuba's finest. A box of premium Vegas Robaina cigars can fetch more than $500 on the international market.

But the man behind the smile was also a simple country farmer who got up at the crack of dawn every day to survey his fields until cancer slowed him down.

"I wouldn't say I've triumphed, but I've done something with my life," he told CNN in 2008. "The first thing is to love the land, take care of the land."

Robaina's family have farmed tobacco continuously since 1845 on the plantation. Under Robaina, business flourished, and the plantation had some of the best yields in the region, producing highly-prized wrapper leaves used for the outer layer of cigars.

Cigar aficionados around the globe called him the dean of Cuba's cigar industry and every year thousands of visitors made the two-hour trek from Havana, hoping to share a stogie and a glass of rum with "the Don."

Robaina kept his lands even when many ranches were nationalized after the 1959 revolution led by Fidel Castro.

"I had a very strong conversation with Fidel 18 or 20 years ago," Robaina said in 2008. "He asked if I would join a big cooperative since I had so many workers, and I told him no.

"For me tobacco growing had to be in the family, done with love. Because in the big cooperatives, everyone's the boss, nobody worries as much as the grower."

Now, almost all of Cuba's tobacco farms are private, according to the Agriculture Ministry. And they generally take their lead from Robaina, planting and harvesting on the same days he did.

"I like to sow during a waxing moon, and harvest in a waning moon," he said.

Robaina said he'd been smoking cigars since he was 10 years old. "When I get really old, I'll stop smoking the strong stuff," he said.

In 1997, Cuba launched the Vegas Robaina brand, named in his honor. They're made from the golden wrapper leaves grown on Robaina's plantation but are rolled in a separate factory.

Like most of Cuba's cigars, they're largely exported. Because of the U.S. trade embargo, however, Cuban cigars are off-limits in America.

Robaina said in 2008 he hoped that policy would end during his lifetime.

"Of course I have hope they'll open up the market," he said. "Cuba's willing to send cigars and they're willing to smoke them. They're going crazy because they can't smoke cigars from here."