17-year-old among victims in Juarez shootout 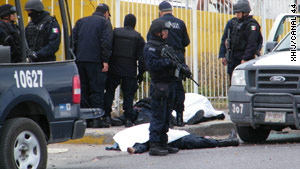 The shootout occurred after two patrol cars stopped a group of people they were investigating.

(CNN) -- A 17-year-old boy was among the seven people killed in a noon shootout Friday on the streets of Ciudad Juarez, Mexico, police said Saturday.

The other victims were police officers, Mayor Jose Reyes Ferriz said Friday. Five were federal police officers and one was a female city police officer, all part of the joint police task force formed to combat drug violence in the border town.

Another federal officer was gravely wounded, Reyes said, and a city officer was wounded but not with life-threatening injuries. A civilian was hit by shrapnel, but those injuries were also not serious, he said.

Reyes said the incident began when two patrol cars, one from federal police and one from city police, stopped several people they had been investigating. Gunmen in at least two vehicles attacked the police convoy with weapons including AK-47s, he said.

The federal police said the gunmen, who escaped in a gray Dodge Durango and a green Dodge Caravan, may have been drug dealers and that the attack may have been in response to several recent arrests in Juarez, including that of eight people apprehended Thursday for possession of weapons, drugs and a stolen van.

The mayor said it wasn't immediately clear why the police had stopped the people or whether the incident was drug related. Investigators are treating the incident "as a direct attack on police officers," he said.

Federal police launched an aerial search for the gunmen's vehicles, but there have been no arrests.

Reyes said at a meeting with federal police that he was ordering an increase of patrol cars so there will be three or four cars per location.

Video: Mayor: 'We have a war going on'

Ciudad Juarez is the most violent city in the nation, with more than 2,600 drug-related deaths in 2009. No official numbers are available, but more than 400 killings have been reported by local media this year.

The city, long the focal point of President Felipe Calderon's battle against drug cartels, came to renewed prominence after the January 31 killings of 15 people, most of them students with no links to organized crime. The massacre sparked outrage throughout Mexico and drew worldwide attention.