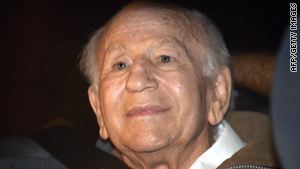 Paul Schaefer, seen in 2005, died in prison, where he was serving a sentence for sexually abusing children.
STORY HIGHLIGHTS
RELATED TOPICS

(CNN) -- Paul Schaefer, a former Nazi who fled Germany in 1961 and founded a cult-like commune in Chile, died Saturday in a prison hospital.

Schaefer was serving a 20-year sentence at the national penitentiary in Santiago for sexually abusing children at the notorious commune known as Colonia Dignidad (The Dignity Colony).

The commune in southern Chile, also called Villa Baviera, was created as a place to safeguard Germanic traditions. Under Schaefer's rule, contact with outsiders was largely forbidden.

Some of Schaefer's crimes date to the 1970s and 1980s, during the military dictatorship of Augusto Pinochet, who had visited the commune.

Former members of the colony have admitted that human rights violations and sexual abuse of children occurred there, saying in a 2006 letter published in a leading Chilean newspaper that they were led by Schaefer's influence.

Schaefer had been in prison since 2006 when he was extradited to Chile from Argentina, where he had been living in hiding.